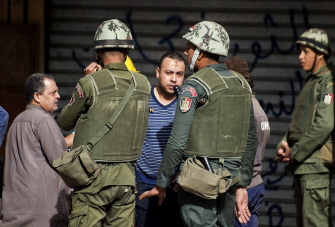 Egyptian army officers will be allowed to arrest civilians starting Monday. Their powers will remain intact until the result of the constitutional referendum is announced.

The power was granted to the military to ensure “the protection of vital installations in the country” and it comes during a week when many street protests have already been scheduled.

Mohamed Lotfy from Amnesty International in Egypt said that the above law, number 107, needs to be read in conjunction with the power granted to the general prosecutor, which according to Lotfy allows detainees to be held for six months in an effort to “protect the revolution.” Lotfy said that these crimes are broadly defined and therefore threaten the freedom of the media, the freedom to assemble, and the freedom of workers to strike. “Along with the new law for the military,” said Lotfy, “it is a dangerous combination.”

“We have concerns about the military handling detainees in general,” Lotfy said. “In our past experience of military rule, we saw how the military formerly handled detainees. How they treated them in detention and put them on military trial, which basically doesn’t guarantee the right of a free trial.”

In an Amnesty International report published in October titled, ‘Brutality Unpunished and Unchecked,’ the rights group outlined abuses under the military that occurred last time they held judicial powers.

The report states the military “arbitrarily detained and tortured thousands of protesters – including women – many of whom then faced grossly unfair trials before military courts. Between January and August 2011, over 12,000 civilians were unfairly tried before such tribunals.”

The report also supported Lotfy’s concern about pre-trial treatment of detainees, reading, “activists and protesters detained by military forces during the 16 months of SCAF’s rule continued to face almost routine torture and ill-treatment, including sexual violence and other gender-based violence.”

“The tactic was used all the time when SCAF was in power,” said Lotfy, “because they saw themselves as having jurisdiction over the whole country, the whole territory of Egypt was seen as a military zone.”

Now that the mandate is directed to “maintain security, and the protection of vital installations in the country” the military will not have to search far for authority in a week when the anger and desperation of millions will come to a climax.