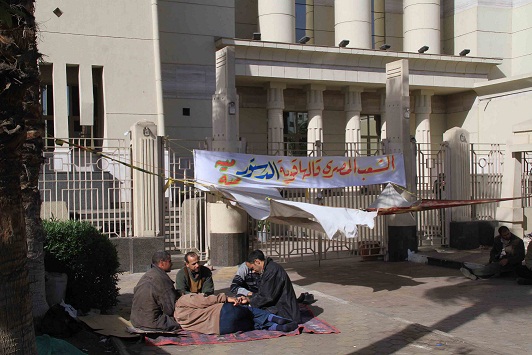 The State Council Judges’ Club (SCJC) announced on Monday its intention to supervise the referendum on the draft constitution, provided that a number of conditions are met.

The SCJC (not to be confused with the Judges Club) had announced a boycott of the referendum process last week; a response to President Mohamed Morsy’s constitutional declaration released on 21 November. President Morsy replaced the declaration with another decree on Saturday.

“The State Council has decided to side with the peoples’ freedom and preserve the validity of the referendum vote by supervising the referendum,” Hamdy Yassin, the head of the SCJC, said during a press conference.

The main condition necessary for the SCJC to supervise the referendum is resolving any blockades on state institutions, especially the Supreme Constitutional Court (SCC). The SCC has suspended its work for eight days, due to the presence of pro-Morsy demonstrators in front of the court. The sit-in began last Sunday; when the SCC was scheduled to look into a case that could have potentially dissolved the Constituent Assembly.

“We also demand that all State Council judges are allowed to exercise their role in supervising the referendum,” Yassin said, “they should also be allowed to withdraw from the polling stations should anybody inhibit their independence or offend their dignity.”

A committee presided over by the head of the SCJC is to be formed in order to make sure that the conditions listed are fulfilled.

“Our decision doesn’t prevent any State Council judge from independently boycotting the supervision of the referendum,” Yassin stressed.

Judges from the Independent Judiciary Movement (IJM) also announced on Monday their intention to supervise the referendum. The IJM had earlier declared a boycott.

“We should be intent on serving the interests of the country and not our own interests,” movement leader Ahmed Soliman said in a press conference. He said that Egypt has been passing through a turbulent era since the January 2011 revolution, adding that if such an era persists, “the state of Egypt shall soon diminish.”

Deputy Head of the Cassation Court Mohamed Nagui Derbala said that the IJM represents their fellow judges from across all Egypt “who shall honour the referendum with their supervision of its process.”

Derbala, reading out a prepared statement to the press, said that the unity of the judiciary is only achieved through respecting its values and traditions and steering clear of any political affiliations.

The IJM’s decision reportedly was not welcomed by those who attended the press conference. Over 30 judges withdrew from the conference amid chants against the proposed constitution and accusations of negligence, state-owned Al-Ahram reported.

The referendum is due to be held on 15 December. Several political movements are calling for its postponement until a more “harmonious” draft of the constitution is reached.

Marches have been taking to the streets for the past two weeks demanding the cancellation of the referendum. Pro-Morsy demonstrators have also organised marches voicing their full support of all Morsy’s decisions, including his decision to put the draft constitution to referendum.