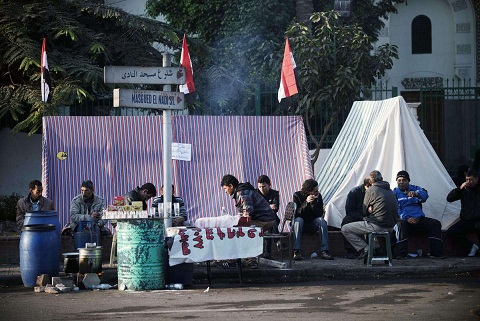 On Monday, hundreds of protesters continued their sit-in against President Mohamed Morsy, held in the area surrounding the presidential palace.

Protesters and opposition groups criticised the new declaration and draft constitution and asserted their demands to form a new Constituent Assembly that represents different sectors of Egyptians.

Republican guards built cement barricades in the entrances leading to the palace and checked IDs of protesters entering the sit-in.

On Monday, the East Cairo prosecution office renewed the imprisonment of four supporters of Morsy for a further 15 days. Investigations proved that the four supporters attacked protesters opposing Morsy with knives and wooden sticks and detained them for 17 hours, before they were handed over to the police.

Mohamed Assi, doctor and revolutionary socialist, asserted that the military and republican guard forces are employing stricter security procedures. He added that they built iron and cement blockades to close some streets leading to the palace. “The Salah Salem entrance is fully blocked, Merghany and Ahram streets’ entrances are now narrowed by the blocks,” he said.

Assi affirmed there are almost 30 tents in the area surrounding the presidential palace, explaining that the decrease in numbers of protesters is due to the fact they are preparing for Tuesday’s mass rallies called for by the National Salvation Front.

Mohamed Kamel, member of Al-Dostour Party, said the republican guards and Central Security Forces (CSF) are currently securing the area surrounding the palace, adding that they promised to protect protesters from any attacks by the Muslim Brotherhood or the Islamist forces supporting Morsy’s decisions. However, he said he does not trust CSF or military personnel anymore, claiming they killed hundreds of Egyptians over the past two years.

Protesters formed an area that they called “the revolution museum”, where they hung pictures and slogans citing different incidents that took place after the 25 January 2011 Revolution.

Ahmed El-Dosouky, student at Ain Shams University, criticised the National Salvation Front saying that because of their unclear decisions, protesters are not able to decide whether they would boycott the constitutional referendum or participate and vote no.

The referendum on the new draft constitution will take place on 15 December.