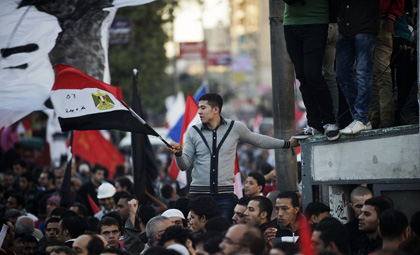 For the second week, rival political groups have planned pro and anti-President Mohamed Morsy demonstrations on the same day in Cairo

After its press conference on Sunday night, the National Salvation Front (NSF) called for mass protests on Tuesday against the constitutional referendum scheduled to take place on 15 December.

“The NSF calls upon our great people to pursue peaceful mobilisation in all liberation squares in the capital and nationwide on [11] December 2012, in rejection of the indifference of the president towards their legitimate demands, and in rejection of the referendum on the constitution that discards rights and freedoms,” said the group’s statement.

The Muslim Brotherhood, along with a list of other Islamist groups and parties, has dubbed its demonstrations “yes to legitimacy” in support of the president and his new constitutional declaration, which he claims was issued to “defuse the [political] crisis, which has worsened lately.”

“Thus, the coalition of Islamic forces calls on all Egyptians to participate in the national duty of voting in favor of this consensual constitution, which represents the entire spectrum of Egyptian society,” read a statement issued by the Brotherhood on Monday.

Islamist groups will assemble at Rabaa Al-Adawiya Mosque and Rashdan Mosque, both located in Nasr City. “The two million man marches will meet in one location to be determined depending on certain circumstances,” said the statement.

The initial announcement stated that the Islamic Legitimate Body for Rights and Reformation, the Salafi Calling, Gama’a Islamiyaa, the Muslim Brotherhood, the Association for Sunni Scholars, the Board of Trustees of the Revolution, the Salafi Front, Al-Nour Party, the Freedom and Justice Party, the Construction and Development Party, the Asala Party and the Islah Party would all participate in the pro-Morsy Tuesday demonstrations.

However, on Monday, state-owned MENA reported that the influential Salafi political group Al-Nour Party said it would not participate in the Tuesday demonstrations, electing to focus its efforts on campaigning in support of the draft constitution leading up to Saturday.

Rabaa Al-Adawiya and Rashdan mosques are near the presidential palace, where opposition groups are expected to gather on Tuesday as part of their mass demonstrations.

The Muslim Brotherhood called for demonstrations last Wednesday at the presidential palace, the same time and location as a sit-in by opposition-led groups. The decision led to clashes between the two sides that lasted late into Wednesday night, resulting in seven deaths, according to the Ministry of Health.

Non-Islamist forces have participated in series of escalated demonstrations against the Constituent Assembly and its draft constitution and decisions that they claim give Morsy the powers of a “dictator.”