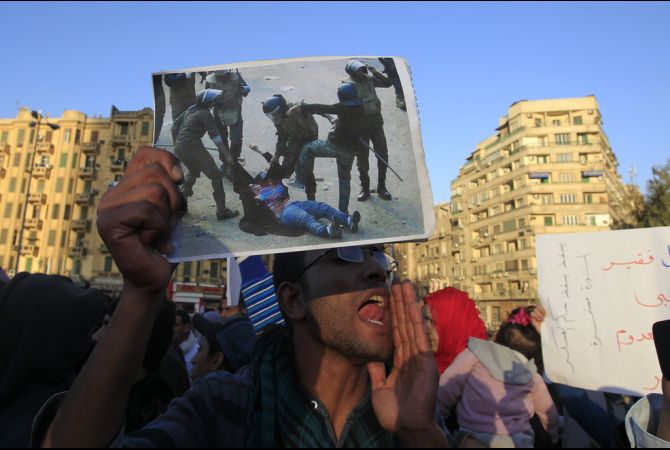 What happened a year ago outside the Cabinet Offices?

The world was shocked by footage taken on 17 December, the second day of the crackdown on the Cabinet Office protest. It showed a woman protester being beaten on the ground by soldiers, tearing her abaya and revealing her bra. Azza Hilal Ahmed Suleiman, aged 49, known as the red-hooded woman on the video, tried to pull the woman away from the scene.

But then the troops attacked her.  ‘They pushed me to the floor and kicked me with their boots and batons,’ she later told an Amnesty-researcher, ’that is how they broke my skull twice and injured my face, ear and other parts of my body.’

The soldiers kept on kicking her, even when Azza Suleiman fell unconscious. She survived, but today she suffers from memory problems.

Azza Hilal Ahmad Suliman submitted a complaint to the South Cairo Public Prosecution Office. To date no one has been held to account for the abuses she suffered and it is unknown whether any members of the army forces were investigated.

In order to deal with this legacy of human rights abuses, the Egyptian authorities should, among other things: