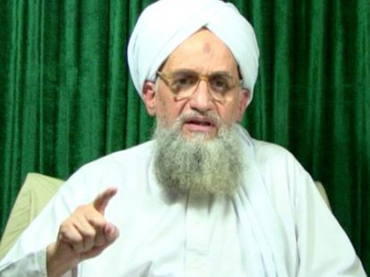 Al-Qaeda leader Ayman Al-Zawahiri has asked former presidential candidate Hazem Salah Abu Ismail to finish the country’s revolution. In a Monday speech the Egyptian-born Al-Qaeda head said that it was up to Abu Ismail to give the Egyptian people what they really want, Shari’a law.

The message was given by way of the militant group’s favourite medium, a YouTube video, and hit on familiar tropes such as “independence from American liars and Israeli domination of the region.”

Al-Zawahiri also asked Abu Ismail, a Salafi, to ensure “our nation’s return to its proper role as a leader in the Arab and Muslim world.”

Calls for an increased Shari’a presence in the constitution has cooled somewhat over the past few weeks as most Salafi groups, including the popular Al-Nour Party, are backing the draft constitution.

But Al-Zawahiri said that “the battle is not over but has just begun” and that it is up to “Sheikh Hazem, his supporters and all those loyal in Egypt, to launch a popular campaign in order to complete the revolution that was aborted, and cheated out of its accomplishments.”

Al-Zawahiri sees the mantle of the Egyptian revolution as belonging “to all those who want to cleanse Egypt of social immortality and corruption.”

Somewhat pre-empting Al-Zawahiri’s call, Abu Ismail’s supporters have spent the week camping in Egyptian Media Production City in 6th of October City.  Media City is host to a plethora of production studios. It is also home to hotels, theatres and shopping districts.

Hard-line Salafi preacher Saeed Abdel-Azim also lashed out against the political opposition on Monday. He claimed that those protesting in Tahrir and the presidential palace are “trying to launch a fitna [upheaval]” in Egypt.

Abdel-Azim said that his comrades are prepared to respond to this threat with, “one million martyrs who are not fearful of death. We are keen on death; death in the path of God is our aspiration.”

“I say this in the name of our Lord, in the name of Islam as our religion, and Muhammad peace be upon him, all options are on the table,” said Abdel-Azim. “We will use any means necessary to champion the truth, in defence of Shari’a.”

One of the narratives emerging in the current political polarisation in Egypt is that the opposition to President Mohamed Morsy and the current government is somehow irreligious or antireligious. However, all of the leading opposition leaders are professed Muslims and opposition rallies in Tahrir slow down and dozens of men pray when the call comes from nearby mosques.