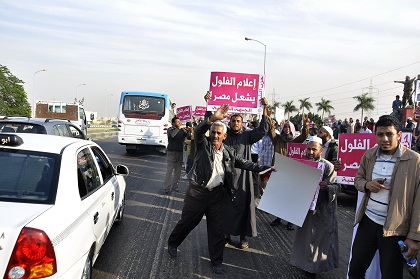 Islamist protesters closed gate number two leading to the city, in addition to gate number four that was closed by the protesters four days ago. Protesters also built toilets and increased the number tents in the area of the sit-in.

Ahmed Mawlana, spokesperson for Al-Shaab Party (Salafi Calling political wing), confirmed that protesters had closed gate 2. “As long as there are escalations in Itihadiya palace, we would escalate the situation here,” he said.

Mawlana explained that prominent figures inside Media Production City are instigating people to topple President Morsy and commit murders and violent actions. He added that the sit-in delivered a clear message to those media figures, asserting that if they do not change their policies, protesters will enter the city. “We would enter the city, stop the broadcast, but we would never hurt anybody. We are peaceful protesters supporting Legitimacy,” he said.

Gamal Saber, spokesperson for the sit-in and president of Al-Ansar Party, asserted that the protesters are willing to continue their sit-in until the results of the constitution referendum are announced. He added that whether or not the draft constitution is adopted, they will hold a rally to celebrate the referendum results. “We won’t be celebrating the result of the referendum, we will be celebrating the victory of our legitimate institutions,” he stated.

Saber said that opposition figures are trying to implement an Israeli-American plan to destroy Egypt, such as the case is in Syria, Iraq and Libya. “Media figures are igniting violence and encouraging protests against legitimate and elected institutions. That is why we are here,” he said.

The spokesperson asserted that protesters would surround all gates leading to the city if media figures continue “instigating speeches against legitimacy.” Saber claimed there are several escalation steps that might be implemented if those speeches continued but he refused to mention any of them.

Saber said that even if they surround all the city’s gates, they could not prevent media figures from entering. However, he claimed that if this was the case, media figures would be too afraid to come to the city.