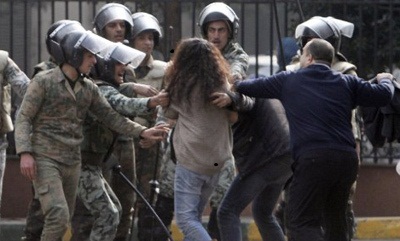 What happened a year ago outside the Cabinet Offices?

On the first day of the clashes, Dr Ghada Kamal, a 28-year-old pharmacist, had an argument with army officers in Tahrir Square, who were threatening women protesters with sexual assault, making lewd gestures and unzipping their trousers.  Moments later, soldiers dragged Dr Ghada Kamal into the Parliament building, and beat her on her head and body with something resembling a black whip. They repeatedly threatened her with rape.

Kamal: “They were sexually harassing me with their hands and they deliberately hit women in their private parts. I was beaten on my breasts and in my private parts both in the front and the back… the officer kept insinuating that I would be sexually targeted that evening – ‘you are mine; we will have a party over you tonight’.”

Dr Ghada Kamal sustained injuries to her face, head and back, and suffered a dislocated shoulder. She was freed a few hours after her assault. Kamal testified about her sexual harassment in custody on Egyptian television and presented her testimony to the investigative judge.

In order to deal with this legacy of human rights abuses, the Egyptian authorities should, among other things.