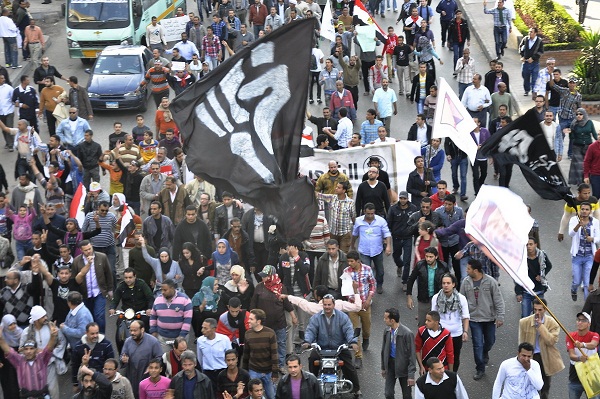 In April 2008, the Mubarak regime had been in power for over 25 years and it was extremely dangerous to publicly voice opposition. Being a political activist during that time, or participating in protests put you at risk of being under scrutiny by state security, a special branch of the police whose name alone was enough to instil fear in people. Under the old emergency law, police had the power to arrest people without charge or even disclose the reason for the arrest.

In spite of this, workers in the Misr Spinning and Weaving Company, a public textile company in Mahalla city employing over 25,000 workers, went on strike demanding a minimum wage and an end to rising prices. The calls for labour action spread and turned into calls for a nationwide strike. Ahmed Maher, general coordinator of 6 April Youth Movement and one of its co-founders, created a Facebook group in March 2008 in support of the strike. The group now has over 70,000 members.

The 6 April Youth Movement was officially formed shortly after the strike.

In Mahalla, the protesters were met with brutality by security forces. One of those who openly supported the strike, Isra’ Abdel-Fattah, was arrested, among others, for her part in the protest. She would spend the next two weeks behind bars.

However, it turned out that the strike in Mahalla was only the beginning of renewed public opposition to the Mubarak regime.

On 4 May 2008, Mubarak’s 80th birthday, calls for another strike were made. Maher once more used Facebook as a means of advocating the strike. A few days later, he was apprehended by state security, beaten, and threatened with further assault.

In 2009, calls for another strike were made by Ahmed Maher’s growing movement, this time with a bigger list of demands than the year before. Most notably these included; suspending gas exports to Israel and electing a constituent assembly to draft a new constitution which would limit any president’s stay in power to two terms.

Since its establishment, the 6 April Youth Movement has become well known for its support of the Mahalla strike in 2008. Three years since its inception, the movement had gathered unprecedented momentum among the public, gaining popularity as one of the main catalysts for change. The movement was also one of the revolution’s key-players during the 18-day uprising.

In spite of this, right before celebrating its third anniversary, tensions within the movement began to surface and the first of many schisms occurred shortly after.

Today, the original 6 April Youth Movement is sometimes referred to as 6 April Ahmed Maher front. “It does not refer to a person, it’s just to distinguish itself from the rest of the groups in the press,” said Ahmed Shawky, a member of the group in the Kafr El-Sheikh Governorate.

Mostafa said the original group has no divisions, rather, “people have defected and when they do, they form their own groups.” He said the split had not affected the movement which includes members across the whole nation.

The 6 April Youth Movement has over 250 groups across the country. In addition, it has more than 20 groups of expatriates outside Egypt. Mohamed Adel, one of the co-founders and a prominent figure in the movement, said there are around 15,000 members in total across Egypt.

Adel said the movement had had no defections, “some people left and they went their way…”

Among the groups which call themselves after 6 April, the one which has been the most vocal is 6 April Democratic Front.

Tarek Al-Khouly, 6 April Democratic Fronts’ former spokesperson and founding member of 6 April political party, joined the movement in July 2010. “I joined the movement because it was the only political body calling for peaceful change back then,” Al-Khouly said, noting that all other political movements, including the Muslim Brotherhood, were not calling for toppling the regime. “The movement’s tools were confined to peaceful protests,” he said.

The 6 April Democratic Front was formed after the January 2011 revolution. Shawky explained that the formation of 6 April Democratic front arose after a group of members called for internal elections within the movement in March 2011.

Shawky said the group had relatively few members at the time and felt that this was not the most suitable time to hold the elections.

“The internal elections have been held in governorates and in committees and the elections for the general coordinator were set to be held, but were postponed owing to current events,” Shawky added.

Shawky said that in protest at the internal elections not being held in March, a few members left the movement and formed the 6 April Democratic Front, claiming that the original movement lacked democratic governance.

“Some people tried to entice some of our members, claiming that we do not have democracy and that we are being financed by external groups,” Shawky said. “About a month or a month and a half ago, Al-Khouly wanted to form a political party.” Al-Khouly was then dismissed from 6 April Democratic Front and, according to Shawky, after he was dismissed, “the Damietta and Kafr El-Sheikh groups returned to the 6 April Youth Movement.”

Al-Khouly, recalls the reasons behind the announcement of Maher’s dismissal, by a number of the movement’s leaders in April 2011.

Another reason which shook the movement’s faith in Maher’s leadership was that he undertook foreign trips alongside other movement leaders like Mohamed Adel and Asma’a Mahfouz, to countries such as Serbia. Al-Khouly stated that the nature and purpose of such “mysterious” trips remained unknown to the rest of the movement’s members. He also added that although the movement received no funds in exchange for such trips, he was personally unaware as to whether those who took the trips received any personal funds.

The main reason for the movement’s split, according to Al-Khouly, was the lack of an internal elections system within the movement to allow for any kind of devolution of power.

The fall-out led to the emergence of the 6 April Democratic Front, a movement Al-Khouly claimed included at least 8,500 of the 10,000 original movement’s members. Maher and his aides were excluded from the new faction. The remaining 1,500 members of 6 April Youth Movement became known as 6 April Ahmed Maher Front.

“Though we are much bigger in numbers,” Al-Khouly said, “our presence is not felt as well as that of Ahmed Maher due to their excellent media capabilities.”

Al-Khouly claimed that Ahmed Maher front’s presence does not go beyond social media while the 6 April Democratic Front can be found working on the ground. However Mohamed Mostafa from the 6 April Youth Movement alleged that “the front is small in number….all of the founding members of the group are still there, they have not left.”

The 6 April Youth Movement is perhaps not as well known for its social and developmental roles. The movement creates awareness campaigns and even has sports activities. It is also lobbies for laws that they consider to be in the public interest, such as a health insurance law.

Despite having been on the political scene for years, the 6 April Youth Movement has not yet formed a political party. Mostafa stated that it wants to remain a political action group as they have no desire for power.

Ahmed Maher was one of the original members of the Constituent Assembly which completed the controversial draft constitution last month. Maher withdrew from the assembly, along with many others including Amr Moussa and representatives of the Christian community.

It was at this critical time in mid-2012 that the 6 April Democratic Front’s future was at stake. Al-Khouly cited messages that the front received from the Muslim Brotherhood where they were threatened with dissolution for putting Maher in an “embarrassing position.” The Democratic Front had refused to support Morsy, announcing that they would boycott the run-off round of elections between him and defeated candidate Ahmed Shafiq.

At that time, Al-Khouly alleged that the Muslim Brotherhood embedded “elements” within the Democratic Front to work on breaking it up from the inside. Al-Khouly specifically mentioned Abdel Rahman Ezz, whom he accused of faking a rift within the front by sending an email to media outlets claiming that Al-Khouly had been sacked. The leaked’reports justified the dismissal stating that Al-Khouly was planning to establish a political party, called 6 April Party, while the Democratic Front did not approve of the idea.

Ezz has reportedly been accused by the Press Syndicate’s board of seriously injuring journalist Al-Hosseini Abu Deif. 6 April Youth Movement or 6 April Ahmed Maher front, is also planning on filing a report to the prosecutor general accusing Ezz of falsely claiming membership of their movement.

“We denied the news of any rift,” Al-Khouly said, claiming that almost all members of the Democratic Front were in agreement as regards the establishment of a new party.

The establishment of the party meant the movement could turn into a legal body subject to financial supervision from the Central Auditing Organisation, thus clearing any accusations of it receiving foreign funds.

The founding of the party was announced on 28 August. It had several goals.

Primarily it aimed at filtering out all the front’s members and clearing out any moles from the Supreme Council of the Armed Forces (SCAF), the State Security, the intelligence, or even the Muslim Brotherhood.

However, its most important goal was to raise a generation of future politicians capable of leading the revolution in the long run.

Al-Khouly said that all that remains of the 6 April Democratic Front are the 20 Muslim-Brotherhood-affiliated members who were pushed into the front in an attempt to break it up. “The rest of the front,” Al-Khouly claimed, “are now part of the yet-to-be-launched party.”In an attempt to filter all 6 April members, the party only includes 5,000 founding members. “Anybody who is allied with the Muslim Brotherhood or was affiliated with the United States has been eliminated from the party,” Al-Khouly said. He confirmed that the party was going to be launched much sooner, had it not been for the recent disturbances the country is currently experiencing.

According to Al-Khouly, internal as well as external factors led to the break-up of a movement as politically effective as 6 April was, before and during the January 2011 revolution. “Being such a strong movement with a huge role in instigating the revolution, dissolving 6 April became the target of any ruling regime, be it that of Mubarak, SCAF or the Muslim Brotherhood,” Al-Khouly said, referring to external intervention. As regards the internal factors, Al-Khouly summed them up in leaders’ mistakes emerging from their desire to pursue personal gains.