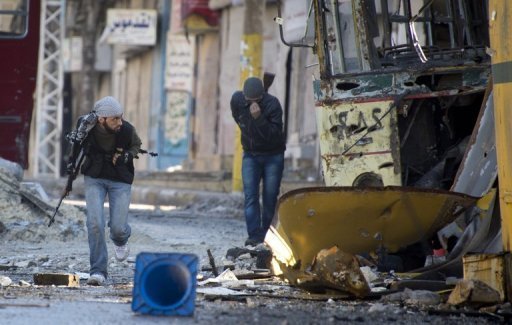 Damascus (AFP) – The Syrian regime has fired Scud missiles at rebel forces trying to oust Bashar Al-Assad, a US official said, after Arab and Western states recognised the opposition bloc as the sole representative there.

“Scuds landed within Syria,” the official told AFP on condition of anonymity.

Earlier Wednesday an AFP journalist in northwestern Syria reported hearing several fierce explosions daily from up to 15 kilometers away.

But the US official speaking later said he could confirm a New York Times story that the regime was unleashing Scuds.

There was no word of any casualties caused by the Soviet-era weapons, famously fired into Israel by Iraq’s Saddam Hussein during the first Gulf War.

The unguided, short-range ballistic Scud missiles, depending on the type employed, have a range of 200 kilometres or more.

Putting further pressure on the Assad regime on Wednesday, Arab and Western states recognised the opposition National Coalition as the sole representative of Syrians.

The declaration, issued at a “Friends of Syria” meeting in Morocco, coincided with battlefield gains by jihadists fighting Assad’s forces and a rapidly deteriorating refugee situation as winter sets in.

“Today, full recognition is given to the National Coalition as the sole representative of the Syrian people,” Moroccan Foreign Minister Saad Eddine El Othmani told a news conference after the meeting his government hosted in Marrakesh.

The talks on the 21-month-old conflict brought together representatives from 114 countries, including about 60 ministers, the Syrian opposition and international organisations.

They came just a day after US President Barack Obama endorsed the National Coalition, following a similar move by the European Union.

The Friends of Syria again called on Assad to stand down, and stressed that his regime would not escape punishment for violations of international law.

A statement also warned Damascus against using chemical weapons, saying this “would draw a serious response from the international community”.

“Then the important thing is to channel more assistance through them, in our case… non-lethal assistance… and then of course we need more humanitarian aid.”

Those at the meeting also called for unimpeded access for humanitarian groups inside Syria.

Coalition spokesman Yaser Tabbara underlined hopes the Marrakesh meeting would help alleviate a mounting humanitarian crisis and support the needs of “liberated” areas, in terms of salaries and services, which the group estimates at nearly $500 million per month.

Under pressure to unite, the opposition agreed on 11 November to establish the coalition and group the various rebel forces under a supreme military council.

But jihadist rebels in Aleppo, a key front line in northern Syria, rejected the agreement, saying they want an Islamic state.

Among them is the Al-Nusra Front, which the United States blacklisted on Tuesday as a terrorist organisation, citing links to Al-Qaeda in Iraq.

“We can have ideological and political differences with certain parties, but the revolutionaries all share the same goal: to overthrow (Assad’s) criminal regime”.

Meanwhile, Deputy Secretary of State William Burns, who led the US delegation to the talks, said: “We have extended an invitation to Moaz al-Khatib and the coalition leadership to visit Washington at the earliest opportunity.”

But he defended the terror blacklisting.

“Al-Nusra, as the president made clear, is little more than a front for Al-Qaeda in Iraq, and all of us have seen what Al-Qaeda in Iraq tried to do to threaten the social fabric of Iraq,” Burns said.

With the total death toll from the civil war now topping 42,000, according to a rights monitor, the UN refugee agency said the number of Syrian refugees who had fled to neighbouring states and North Africa had now passed half a million.

In the latest violence, at least seven people were killed and 50 wounded when three bombs struck the main entrance of the interior ministry in Damascus, a security official said.

Other bombings in the capital killed four people and wounded another 26, the Observatory and news agency SANA reported.

The Observatory said 121 were killed nationwide, including 57 civilians.