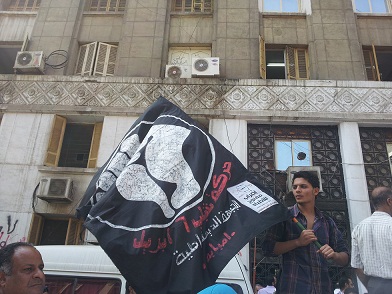 The 6 April Youth Movement has decided to spend this pivotal week educating instead of protesting. In a final push before Saturday’s referendum vote, their members have spread out around the country to hand out flyers and discuss the constitution with every group of Egyptian voters.
“We have handed out more than three million flyers,” said 6 April spokesman Mohamed Adel. “We are particularly focussing on poorer and rural areas.”
The main aspects which 6 April members will discuss with the public, include the treatment of social issues and rights in the constitution.
Adel said that the group is also preparing for a comprehensive observer role in each governorate during tomorrow’s vote. This role will take on increasing importance after a Carter Centre announcement that they will not be able to observe the referendum. The Carter Centre said, “The late release of regulations for witnesses precludes the Centre from conducting a comprehensive assessment of all aspects of the referendum process, consistent with its methodology for professional observation of elections.”
Lawyer and 6 April member Hania Mansour has been going out all week to speak to people about the constitution. She said that lately, the Muslim Brotherhood has been hassling campaigners, sometimes engaging in small fights, “In each town, if we meet Muslim Brothers, there is a problem. They are being aggressive.”
She said that the public, on the other hand, has been receptive to the dialogue. Mansour described three types of voters they will be speaking to:
The first group of voters is against the Muslim Brotherhood and therefore against the constitution, regardless of its content.
The second group of voters is curious about what the campaigners think and are open to at least listening to 6 April’s point of view.
The third group of voters asks, ‘why not vote yes?’ “These people read the text and found nothing bad,” said Mansour, “so we start a conversation with them and discuss certain articles in-depth.” They hope to shed light on confusing or subtly worded articles in the constitution.
The group will not be officially joining the opposition marches on Friday, in order to give focus to their campaign.