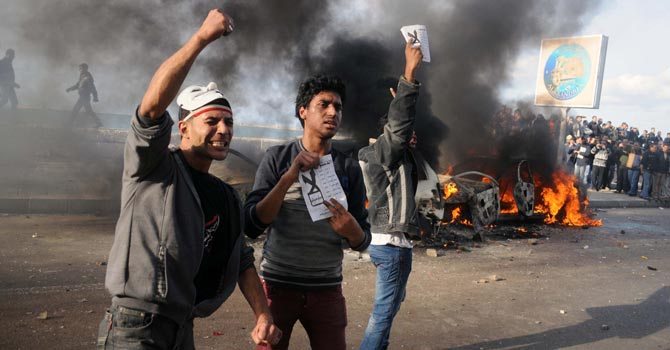 Swords and knives were brandished as fights between pro and anti-constitution demonstrators dragged on for over 12 hours in Alexandria.

Sheikh Ahmed Al-Mahallawy, popular Islamist preacher, was prevented from leaving Al-Qa’ed Ibrahim Mosque while fighting raged outside the mosque. Hamdy Khalaf, a lawyer who witnessed parts of the fight, claimed that the protesters who surrounded the mosque intended to hold Al-Mahallawy and his supporters inside until the police came to arrest them.

“They didn’t intend to attack the mosque nor those inside,” Khalaf said. He added that four sheikhs were arrested while in possession of swords.

Al-Mahallawy was released around 3am Saturday in the presence of the Alexandria security sirector and Nasr Al-Abd, the Alexandria intelligence chief, said Mohamed Soudan, the Freedom and Justice Party (FJP) spokesperson in Alexandria.

Soudan said that almost 150 supporters of Al-Mahallawy, including women and children, were also trapped in the mosque. He added that police secured the anti-constitution demonstrators, whom he accused of being “thugs,” and of attacking the mosque and intending to burn it down.

Clashes erupted after the Friday prayer, at which Al-Mahallawy was leading the worshippers. Anti-constitution protesters claimed Al-Mahallawy had urged those praying to vote in favour of the draft constitution on Saturday. The Ministry of Endowments had previously urged preachers against influencing voters’ opinions.

“Even if Al-Mahallawy asked people to vote ‘Yes’ during the religious lesson he gives out every Friday after prayer,” Soudan said, “that is not wrong, as long as he didn’t say it during the prayer speech.”

Political activist Ramy Abdel Gelil, who attended the Friday prayer and witnessed the clashes which followed, claimed that Al-Mahallawy urged people to vote “Yes” during the prayer speech and not the religious lesson.

“Three of the anti-constitution demonstrators were then dragged into the mosque; they were released only after being severely beaten,” Abdel Gelil said.

Musa Hassan, a political activist, claimed in a video to have been dragged into the mosque by Al-Mahallawy supporters. They then claimed he was a Coptic Christian while beating and electrocuting him. Hassan, who is Muslim, alleged that the assault took place in the presence of Al-Mahallawy and that he didn’t try to stop the beating. He was released after Al-Abd personally interfered, he said.

Soudan denied that any of the anti-constitution protesters were beaten, though he admitted that Al-Mahallawy’s supporters dragged at least two of them into the mosque.

“The protesters were throwing rocks at Al-Mahallawy from outside the mosque,” Soudan said, “his supporters dragged a couple in to put an end to their attacks.”

The siege on the mosque began soon afterwards. At around 4 pm, swordfights occurred between the rival groups. At least two cars, with the Salafi Al-Nour Party badge on them, were wrecked. Al-Nour Party spokesperson Yousri Hammad denied the presence of party members within the clashes.

“Bearded people came out of the cars with sticks, Molotov cocktails and swords,” Abdel Gelil said, adding that one of them was spotted carrying an automatic rifle.

Soudan corroborated the arrival of Islamist-oriented people armed with weapons. He said that the group of about 20 were outnumbered by the some 300 anti-constitution protesters, who were also armed.

Soudan claimed that Muslim Brotherhood and FJP members have steered clear of any clashes. He stated that they were only present to observe and report to their leaders.

“We were in constant contact with Al-Mahallawy who urged us not to interfere,” Soudan said.

Hammad claimed that the clashes were a conspiracy aimed at spreading violence before the referendum. “There have been calls since Thursday night rallying for the attack of Al-Mahallawy,” he said.