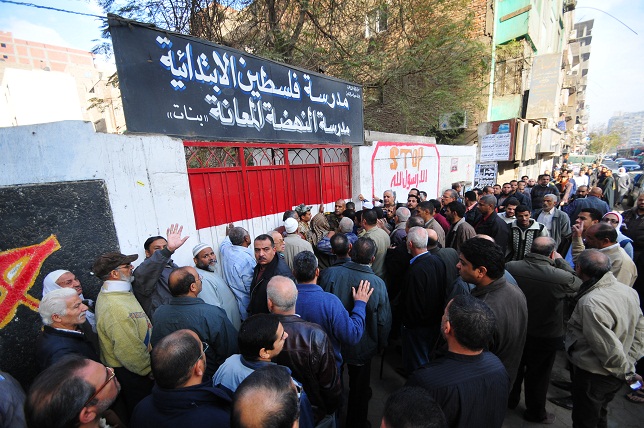 As people queued to vote in a referendum on a draft constitution on Saturday, debates on voting “Yes” or “No” continued.

In Cairo’s Manial area voters started queuing since 8am, while other stations were relatively empty.

“I voted ‘Yes’ because I’m tired of all the protests. I want the country to be stable and this won’t happen without a constitution,” said Ahmed, a civil engineer.

“The constitution is distorted by the media. I’ll vote ‘Yes’ because it limits the president’s authority, even the prime minister is accountable to the People’s Assembly,” said voter Ahmed Anwar.

Another voter disagreed with Anwar: “This constitution offers the president unprecedented powers and impunity, it creates a new pharaoh,” he said.

Nadia Saad, 32, a housewife said, “I salute the Constituent Assembly for their work. This is the best constitution that could have ever been made in Egyptian history.”

“I read the constitution four times, took notes and talked to lawyers. I debated with them for five days and my vote is ‘No.’ Egypt deserves a better constitution,” Heba Ali, an English teacher said.

In Nasr City and Heliopolis the voting public, mainly women, filled up the almost all of the polling stations.

“No. I won’t accept a constitution dictated by the supreme guide of the Muslim Brotherhood. It clearly serves their every interest. This should be named the Brotherhood’s constitution not Egypt’s,” said Mariam, 21, a college student.

“We all have to vote ‘Yes.’ We have to stand against those who are raping girls in Tahrir [Square], why else would they set up tents?” said Omneya, a law student.

Sanaa’, a doorman’s wife in her sixties, said, “I will definitely vote “No.” Look where trusting the Brotherhood has gotten us; they did nothing but work for their personal interests and try to control everything in the country.”

The woman standing behind her agreed: “The only thing Morsy did since he got in power was make our lives harder. Prices are rising; our youth are being killed every day, no justice, no freedom and all his promises are empty. Nobody trusts him anymore.”

Mohamed Omar, a worker in a ceramic factory, said that he read the constitution and he thought it was really good; “there are some controversial articles but we elect the People’s Assembly that drafts laws so the power is in our hands.”

Myriam Victor, a mass communication student said she went to the voting station after reading on Twitter that Copts were prevented from voting in her area, “there was no such thing, the station was well organised; people were discussing their views on the constitution in groups without any clashes or violations.”

Fatma Abdel Hady, a retired teacher, offered a different view, “here’s how I thought about it, if we voted ‘Yes’ the majority of people would be angry which will lead to more clashes and blood, but if we voted ‘No’ only the Brotherhood would be angry. That’s why ‘No’ makes more sense to me.”

“This constitution is for today’s youth and future generations; they are already struggling; let’s not add to their hardships in the name of religion,” Abdel Hady added.

Hala, 43, a doctor said, “I read the constitution and didn’t understand most of it. I’m unsure and that’s why I’ll vote ‘No.’ If you’re not sure you shouldn’t risk the country’s future.”

At the Ain Shams Faculty for Girls, one of the biggest stations in Heliopolis, a man was kicked out by voters after he talked to people about how all Muslims should vote “Yes.”

“We’re fed up with people who use religion to persuade people,” said Omar Hafez, 37, an engineer.

Youssef, 20, a political science student said “you can’t build a country on false bases. I’m ready to wait for as long as it takes to have an acceptable constitution that preserves our rights and defines our duties. This is what we rebelled for and that’s what we will get eventually, no matter what the Brotherhood thinks.”