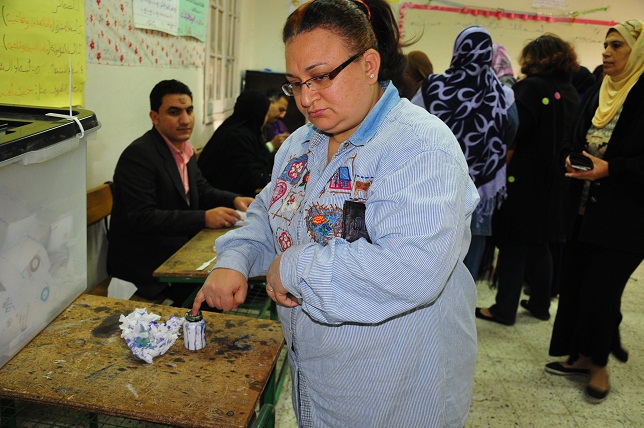 Human rights and civil society organisations have reported hundreds of violations in polling stations across the country as Egyptians vote in the referendum on the draft constitution.

In Cairo, the Independent Coalition for Monitoring Elections reported 21 violations by 2pm.

The National Salvation Front, the largest opposition bloc, set up a referendum monitoring control room in the headquarters of the Egyptian Social Democratic Party.

The front released a statement saying it observed violations in all 10 governorates in which the referendum was being held Saturday. They released seven violation reports by 3pm, listing a total of 356 violations nationwide.

It released another statement, accusing the Muslim Brotherhood of attempting to rig the referendum results.

“The National Salvation Front’s operations room is extremely worried and upset at the number of violations reported in today’s referendum on the constitution. The size of these violations indicates a clear will to infringe on the will of votes by the Muslim Brotherhood in order to pass the Brotherhood’s constitution,” said the statement.

“We urge all authorities supervising the referendum to assume their responsibilities in order to ensure the fairness of the referendum and we urge the Egyptian people to head to the polls and vote ‘No’ to prevent all attempts to falsify the will of the people.”

NSF spokesperson Khaled Dawoud told Daily News Egypt that although there were indications of attempts to rig the referendum, it was “too early to reach conclusions” regarding their continued participation.

“We are extremely worried over this, but there is a high turnout which shows that we have the power to mobilise,” said Dawoud. “The hundreds of thousands that have been protesting against this constitution over the past two weeks are now taking to the streets and voting ‘No’.”

The NSF said it faxed all violations it reported to the Supreme Electoral Commission but the commission said it had received nothing from the front. The Egyptian Social Democratic Party released a photocopy of the fax in response.

“We only published the violations we were able to prove, but we are actually receiving reports of 15 violations per minute,” said Dawoud.

Most violations had to do with an absence of judges at polling stations or judges refusing to show proof of identity.

The Supreme Electoral Commission announced the closing of 18 polling stations in the Karmouz area of Alexandria because no judges showed up.

The I Am a Free Egyptian campaign released two reports, listing violations in Alexandria.

Violations mainly consisted of lateness in opening polling stations to the public, of not having ink to mark voters’ fingers, or using the wrong kind.

Several judges reportedly refused monitors access to polling stations. They also reportedly directed voters to vote “Yes” or allowed Islamist monitors, election officials inside poll station and campaigners outside to do so.

Many poll stations had incomplete voter registration lists or none at all. Others used unsealed ballot boxes. Reports also indicated that in several polling stations only observers from the Muslim Brotherhood were allowed inside.

Some stations did not have any judges while over 50 had yet to open in Dakahlia alone by 2pm. In Cairo, some ballots were not stamped with the state official seal.

There were also reports of ballot stuffing in Cairo and group voting in several governorates. Some boxes were full before voting started in several stations, including 18 boxes in a Hadayek Al-Qobba station in Cairo.

There was at least one instance in a Cairo polling station where a voter found his name had been signed off in the registration list despite him not voting yet. Names of dead citizens also appeared on several voter registration lists.

In two Nasr City polling stations in Cairo, a judge reportedly did not allow Christian voters inside.

In front of a Ain Shams polling station, the Muslim Brotherhood were supposedly seen distributing sugar, oil and tea.

The NSF reports also included several instances where instead of judges, deputy prosecutors or even lawyers were monitoring the referendum. In other stations, reporters for privately owned newspapers and television channels were banned from entering.

While most violations were in favour of the “Yes” vote, there was one instance in a Katameya polling station where ballots with “Yes” votes were reportedly changed to “No” votes.

There have been over 1,400 complaints filed against individuals accusing them of impersonating judges, said Ghada Shahbandar from the Egyptian Organisation for Human Rights