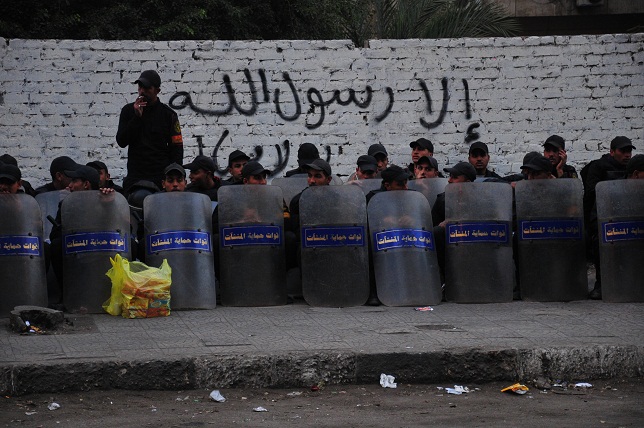 Hazem Salah Abu Ismail, the disqualified Salafi  presidential candidate, called for the dismissal of the minister of interior on Saturday night, following attempts of National Security Forces to enter the headquarters of his presidential campaign.

A brief statement read: “sacking the minister of interior is a must now… Today [Sunday] at 7pm, we will head to Dokki police station to inquire about what happened.”

This comes after a large group of Salafis attacked the headquarters of Al-Wafd Party and newspaper, burning parts of its entrance and causing damage to some cars.

Al-Wafd Secretary General Fouad Badrawy filed a complaint against Abu Ismail, accusing him of inciting his supporters to attack Al-Wafd Party, its personnel and the security forces guarding it.

Abu Ismail denied claims that the attackers were members of his presidential campaign Hazemoon, saying that he did not know who was responsible for besieging Al-Wafd Party’s headquarters. He also condemned acts of violence.

However, following the attacks Salafis expressed their delight on Facebook pages.

CEO of Al-Wafd newspaper Mostafa Sherdy said Salafis attacked the newspaper and the party with fireworks, birdshot and live ammunition. He added that there are bullet holes on the shells of some of the cars destroyed by the attackers.

Sherdy said the police tried to protect the headquarters at first, before they withdrew when the attackers started firing birdshot. “Nowadays, crimes are videotaped, but criminals are not punished.”

He added that if Abu Ismail did not call for the attacks, then he should take the responsibility of convincing his supporters to refrain from violence.

Gamal Saber, official spokesperson for Hazemoon, said he was asleep during the attacks on Al-Wafd, stating that violence was never the used by Abu Ismail supporters to express their anger.

Saber added that a march would take place from Assad Ibn Al-Furat mosque to Dokki police station on Sunday night, to condemn the police attacks on the headquarters of Abu Ismail’s presidential campaign.

The headquarters of the Popular Current, in Lebanon square, was also besieged by Salafis earlier on Saturday. Salafis chanted slogans criticising the ministry of interior for not protecting Sheikh El-Mahallawy, who was besieged in a mosque in Alexandria after reportedly urging worshippers to vote in favour of the draft constitution. Salafis held the current leader Hamdeen Sabahy responsible for besieging the mosque.

Members of the Popular Current, responsible for monitoring the constitution referendum, were forced to move to Al-Karama Party headquarters as a result of the Salafi siege. The members moved again to an unknown office, after Salafis attacked Al-Wafd Party and newspaper, located near Al-Karama headquarters.

Essam El-Erian, vice president of Freedom and Justice Party, said Abu Ismail and his supporters are not responsible for the attacks. He further added that those who attacked Al-Wafd Party are probably the same people who attacked FJP’s several offices.

Abu Ismail supporters were also accused of attacking director Khaled Youssef while they were holding a sit-in a few days ago, as he tried to enter Media Production City from gate number 2. Youssef has brought a lawsuit against Abu Ismail, holding him responsible for the attacks against him.

Safwat Barakat, coordinator of Hazemoon campaign, said Muslims were angry because the ministry of interior did not protect Sheikh El-Mahallawy. Accordingly, they organised a march to the Popular Current headquarters to express their anger. However, Barakat denied that those who held the march or attacked Al-Wafd headquarters were members of Hazemoon or supporters of Abu Ismail.

“We don’t attack people, we were in front of Media Production City for one week and we didn’t hurt anybody,” he said.

Additionally, Al-Watan newspaper received threats by Salafi groups that it would be the target of the next attack if it continued its “instigating speeches,” according to Al-Watan’s official Facebook page.