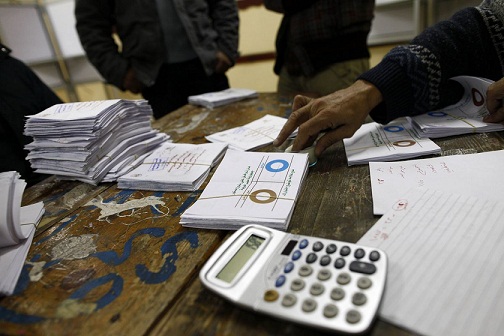 The opposing camps over the constitutional referendum have both claimed victory after the first stage of voting on Saturday.

The NSF released a statement on Sunday claiming 66 per cent of voters had rejected the proposed constitution.

Before the referendum the NSF campaigned for a “No” vote while the FJP lead the campaign in favour of the proposed constitution.

The NSF announced, “we emphasise that unprecedented fraud has been used, however, we won.” The statement thanked the Egyptian people for turning out “to recover their homeland and their will and their future from the kidnapping attempts by the [Muslim] Brotherhood.”

The NSF statement asserted, “we will not allow what the Brotherhood are accustomed to doing regarding publishing fraudulent and misleading data to circumvent the will of the nation.”

Spokesperson for the NSF, Khaled Dawoud reported, “the figure published in the statement is an estimate from exit and opinion polls from 7pm [Saturday] night.”

Waleed El Haddad, a spokesperson for the FJP said, “we received our information directly from the polling stations and they are 95 per cent accurate.” He added, “our results are the most accurate; they are from the judges, NGOs and the media.”

In response to the NSF’s statement El Haddad commented, “we have seen this situation before in the presidential elections. [Ahmed] Shafiq’s supporters claimed victory but our results were the most accurate then as well.”

Looking forward to the second stage of the referendum due to take place on 22 December, El Haddad said, “we will do better next week, and we predict that we will have more than 65 per cent of the vote.”

The confidence of the FJP is based on the results from the last parliamentary and presidential elections, reported El Haddad. “There could be some differences but there is definitely a trend.”

“I want to stress that there were serious violations during [Saturday’s] vote and we are calling for a full investigation in to this.”

The Brotherhood also released a statement congratulating the Egyptian people on a high turnout and encouraged people to vote freely. The statement warned of what the Brotherhood believe to be attempts by the media to influence voters urging them “not [to] listen or think about some of the media owned by the remnants of the former regime, which publish lies and slander on the constitution.”