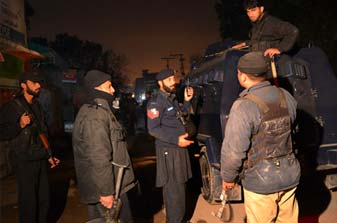 Peshawar, Pakistan (AFP) – Six people were killed Sunday as police and troops battled militants armed with automatic weapons, grenades and mortars in northwest Pakistan’s Peshawar, a day after a deadly Taliban raid on the city’s airport.

Fierce firing broke out after police acting on an intelligence report stormed a building near the airport, where a suicide and rocket attack on Saturday killed five civilians and the five attackers, and wounded 50 other people.

The assault late Saturday, claimed by the Pakistani Taliban, sparked prolonged gunfire and forced authorities to close the airport, a commercial hub and Pakistan Air Force (PAF) base in Peshawar on the edge of the tribal belt.

It was the second Islamist militant attack in four months on a military air base in nuclear-armed Pakistan. In August 11 people were killed when heavily-armed insurgents wearing suicide vests stormed a facility in the northwestern town of Kamra.

Police backed by troops launched a raid early Sunday on a building under construction near the airport following reports that five militants who fled after the airport attack had taken refuge there, according to Provincial Information Minister Mian Iftikhar Hussain.

In the fierce shootout that followed, three militants and a policemen were killed, police said, while two other officers were wounded.

The clashes ended after six hours when the two remaining militants detonated their suicide vests inside the building, another senior police officer, Imtiaz Altaf, told AFP.

“All five militants are dead now and the area has been cleared,” Altaf said.

“All of them were wearing suicide jackets. Three were killed in a shoot out with police, while two others blew themselves up in the under construction building.”

A PAF statement said five attackers were killed on Saturday and no damage was done to air force personnel or equipment.

Doctor Umar Ayub, chief of Khyber Teaching Hospital near the airport, said five civilians had also been killed and some 50 wounded.

“The base is in total control and normal operations have resumed. The security alert was also raised on other PAF air bases as well,” the air force added.

Peshawar airport is a joint military-civilian facility. Civil Aviation Authority spokesman Pervez George said the passenger side had reopened after an 18-hour closure and there was no damage to the terminals.

Security forces found three suicide jackets near one of the vehicles, it said.

“Security forces consisting of Pakistan Air Force and Army personnel who were on full alert, cordoned off the base and effectively repulsed the attack,” the air force said.

Television pictures showed a vehicle with a smashed windscreen, another damaged car, bushes on fire and what appeared to be a large breach in a wall.

Five nearby houses were destroyed after rockets landed on them and several other houses developed cracks, while the bomb squad detonated five out of eight bombs found near the base after the attack.

Pakistani Taliban spokesman Ehsanullah Ehsan told AFP by telephone from an undisclosed location that the group would continue to target the airport.

“Our target was jet fighter plans and gunship helicopters and soon we will target them again,” he said.

The armed forces have been waging a bloody campaign against the Taliban in the country’s northwest in recent years and the militants frequently attack military targets.

Aside from the August attack on Kamra, in May 2011 it took 17 hours to quell an assault claimed by the Taliban on an air base in Karachi. The attack piled embarrassment on the armed forces just three weeks after US troops killed Al-Qaeda leader Osama bin Laden in Pakistan.

Pakistan says more than 35,000 people have been killed as a result of terrorism in the country since the 9/11 attacks on the United States. Its forces have for years been battling homegrown militants in the northwest.