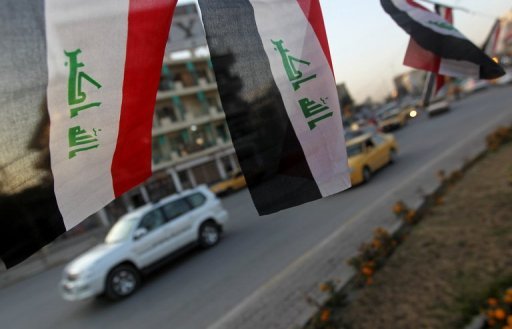 Baghdad (AFP) – In the space of a year since the departure of US forces, Iraq has faced political turmoil including calls to remove the premier, a top official being sentenced to death and rising Arab-Kurd tensions.

Disputes among Iraqi politicians escalated as US troops departed on 18 December, ending a nearly nine-year war that cost the lives of tens of thousands of Iraqis, thousands of Americans and hundreds of billions of dollars.

The continual conflicts among top politicians show Iraq has still not achieved the political reconciliation that American officials hoped would accompany the 2007-2008 surge of US troops, which helped to bring rampant bloodshed in Iraq under a semblance of control.

UN Secretary General Ban Ki-moon warned Iraq political leaders about the negative impact of their strained relations on both governance and security during a December visit to Baghdad.

And while Iraqi security forces have held their own in their first full year without US troops to support them, they still face shortcomings and insurgent attacks remain common.

In the past year, members of the secular, Sunni-backed Iraqiya bloc boycotted parliament and the cabinet, the president of the autonomous Kurdistan region, Massud Barzani, repeatedly sparred with Prime Minister Nuri Al-Maliki, and powerful Shi’a cleric Moqtada Al-Sadr also criticised the premier.

Opposition to Maliki among members of his less-than-unified national unity government ultimately escalated into calls for him to be removed from power, but his opponents lacked the parliamentary votes to do so.

Authorities also issued an arrest warrant for Vice President Tareq Al-Hashemi, a Sunni member of Iraqiya, who fled the country and insists the charges are politically motivated.

He has since been given multiple death sentences in absentia for crimes including murder.

The Kurdistan region meanwhile drew Baghdad’s ire by making oil deals with foreign firms without federal approval, and halted its oil exports via the federal government for more than four months over a payments dispute.

And capping a year of turmoil, a deadly shootout during an attempt by Iraqi forces to arrest a Kurdish man and the establishment of a new federal military command covering disputed territory have led to high Arab-Kurd tensions in north Iraq, with both Baghdad and Kurdistan deploying military reinforcements.

Ban told heads of Iraqi political blocs that poor relations among Iraqi leaders are a problem that “hampers the adoption of necessary reforms and constitutionally mandated legislation. It impedes effective governance, the delivery of services and the fair distribution of resources.”

“Above all, I worry that increased political polarisation could stoke sectarian violence and reverse the precious security gains against terrorism in recent years,” Ban said.

Iraqi security forces have held their own since the US withdrawal, with the number of people killed in the first 11 months of 2012 less than the same period the year before, according to Iraqi government figures.

“The security situation has remained largely unchanged, despite the withdrawal of American troops. This in itself is a remarkable achievement,” said Joost Hiltermann, deputy director of the International Crisis Group’s Middle East and North Africa programme.

But insurgent groups remain a threat, carrying out attacks in Iraq almost every day that kill well over 100 people per month and wound many more.

Iraq has only limited naval forces, and will have an air defence gap until it receives F-16 jets it has ordered from the United States, which Washington has said will not begin to be delivered until 2014.