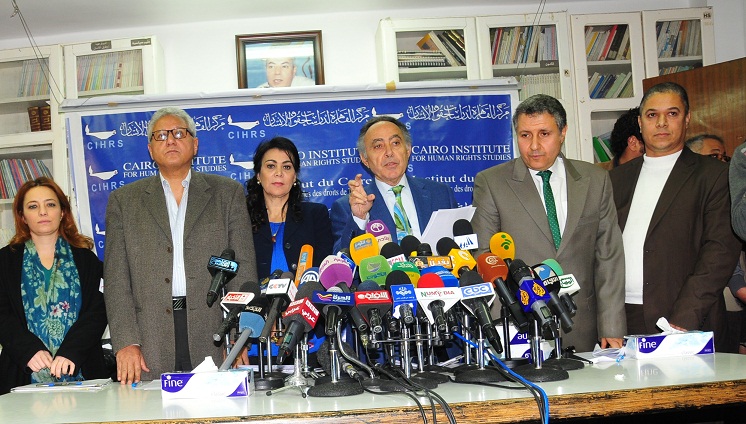 Rights organisations have demanded that the first stage of the referendum be repeated and that all judges supervise the second stage.

“The referendum suffered violations that could lead to corrupt results and its complete invalidity,” read a statement issued by seven rights’ groups.

The statement, titled A Referendum Held in Mubarak’s Style, offered a list of violations including absence of complete judicial supervision and the impersonation of judges in some polling stations.

Civil observers were banned from attending the vote counting process while members of the Freedom and Justice party (FJP) attended.

Incidents in which Copts were prevented from voting were reported; women were forced to wait for a long time to cast their vote and in some areas men voted on their behalf.

Rights’ organisations held a press conference on Sunday to condemn the violations.

The first stage of the referendum was held on Saturday 15 December in ten governorates.

Representatives demanded the first stage be repeated and called on the Supreme Electoral Committee (SEC) to prevent violations from happening in the second stage.

The statement said that rights organisations agreed to oversee the referendum to guarantee its integrity, especially with the absence of international monitoring.

Negad Al-Boraei, rights’ activist and head of Democracy Development group said that the SEC is still “living in the shadows of Mubarak’s regime.”

“They are saying the violations are minimal and won’t affect the results; I say investigate first then decide if it has an effect or not,” Al-Boraei said.

He added that counting the votes happened “in the dark” in the absence of civil and party representatives.

Magdy Abdel Hamid, head of the Egyptian Association for Promoting Community participation said that the media played an important role in exposing violations.

He added that civil organisations were banned from entering polling stations while Hossam El-Gheriany, head of the Constituent Assembly gave 20,000 authorisations to FJP members.

“These authorisations enabled them to observe the stations and they tried to persuade people to vote ‘Yes’ inside the stations,” he said.

Al-Boraei said the SEC should admit its lack of organisation in the first stage of the referendum.

“They should also admit that there were violations and procedural errors,” he said.

Bahy El-Din Hassan, manager of the Cairo Institute for Human Rights Studies said that manipulating the will of the people was enough reason to repeat the referendum.

“The manipulation started with the formation of the Constituent Assembly, a constitution that represents a single ideology and the call for a referendum on 200 articles in the space of two weeks,” Hassan said.

The representatives at the conference talked about their demands and plans to escalate.

“We call on the minister of justice to delegate judges to investigate violations… we demand the SEC to consider these violations and repeat the first stage,” Al-Boarei said.

He added that if they refused, they could jeopardise the legitimacy of the constitution.

“Violations may include crimes punishable by law. For example why would the general secretary of Tanta governorate meet with the judges before the referendum?” he said.

Magdy Abdel Hamid called on the judges who boycotted the first stage to participate in the second because “they are the only guarantee of integrity.”

He also demanded authorising NGOs to supervise the second stage scheduled for 22 December, and allowing them to attend the counting process.

“We revolted against corruption thus we can’t allow it to happen in a referendum on our constitution,” he said.

The FJP released a statement saying that its referendum monitors reported no incidents or violations of serious nature in the first stage.

Azza Kamal, president of the Centre for Appropriate Communication Techniques for Development (ACT) said the centre received more than 4,000 complaints and they filed 1,400 violation reports with the police.