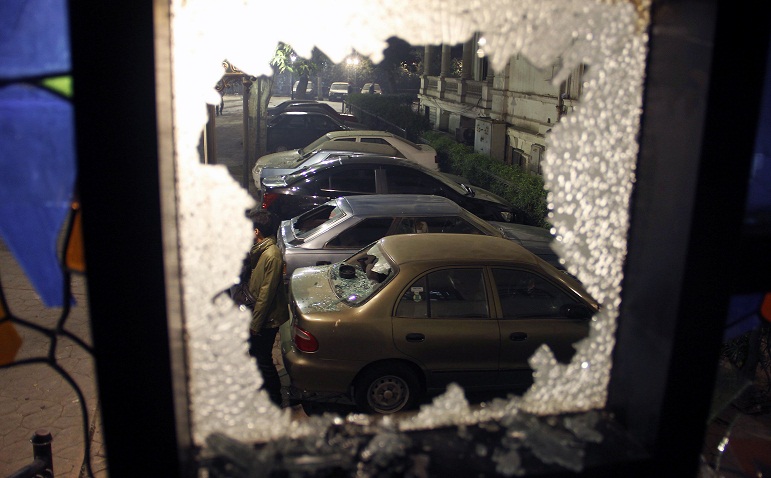 Over 500 Salafi protestors set fire to Al-Wafd Party headquarters in Dokki as dozens more surround the headquarters of the Popular Current in Lebanon Square, Mohandiseen.

The protestors attacked the party headquarters as well as the party newspaper’s offices, throwing flares that set fire to the building as well as smashing the windshields of several parked cars and injuring Al-Wafd members according to the party’s statement.

High board member Bahaa Abu Shaqa refused to comment on the claims that there were gunshot wounds and that Secretary General Fouad Badrawy was among the injured.

Police later arrived and tear gas canisters were launched although it is unclear if the police or the Salafis used it, with Al-Wafd officials claiming the latter.

Al-Wafd officials said the assailants were members of the Hazemoon group, supporters of Salafi leader Hazem Salah Abu Ismail but Abu Ismail has denied links to any violence or protests happening tonight.

He added in a press statement that he condemns these attacks and that it was obvious there is a plan to involve his name in such events, threatening to take legal action against all who accuse him of being involved in the attacks.

Known members of Hazemoon such as Abdel Rahman Ezz were seen near Al-Wafd and others were expressing their joy over the attacks on social networking websites.

The mob earlier demonstrated in Lebanon Square in protest of Friday’s events in Alexandria were a mosque was surrounded. They blamed the Ministry of Interior for failing to protect the mosque and held Popular Current leader Hamdeen Sabahy for the event.

The group surround the Popular Current’s main office in Lebanon Square and the referendum-monitoring unit inside had to relocate to the Karama Party headquarters in Dokki first, and then again to a secret place after the nearby Al-Wafd headquarters were attacked, according to a Popular Current statement.

The statement added that the Islamists only left Mohandiseen after Sabahy called the police  and that residents of the nearby Meet Okba area defended the headquarters.

Independent newspapers Al-Masry Al-Youm and Al-Watan received threats by the group that they were next, as did the OnTV television channel.

The sit-in at Tahrir Square was also attacked and bullets fired in the air, reportedly by the same group.