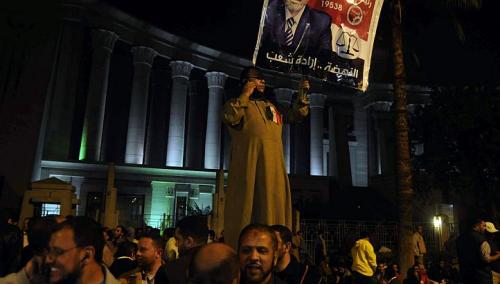 Supporters of President Mohamed Morsy and the proposed constitution demonstrated outside the Supreme Constitutional Court on Sunday.

Demonstrators outside the court prevented the president of the court, Maher Al-Beheiry from entering his office, reported state news agency MENA.

Waleed El-Haddad, a spokesperson for the Freedom and Justice Party (FJP) denied that any members of his party were taking part in the demonstration on Sunday. He said “we do not condone any actions that prevent the judges from carrying out their work.”

Ahmed Mawlana, spokesperson for the Salafi Front Party also denied that any of its members were part of the demonstration.

The demonstration is a continuation of a sit-in, which began on 2 December in support of Morsy. This resulted in the court indefinitely suspending its operations, which included a scheduled hearing for cases challenging the legitimacy of the Constituent Assembly and the Shura Council.

Lawyer Samir Sabry filed a complaint against Morsy and the FJP on 3 December, accusing them of being responsible for the sit-in and called for an investigation in to the incident.

El-Haddad did admit that some members of the FJP were part of the sit-in when it began but re-affirmed that the party objects to the sit-in and none of its members are currently taking part.

Al-Beiheiry contacted the Cairo security directorate to inform it that judges had been prevented from entering the court, reported MENA.