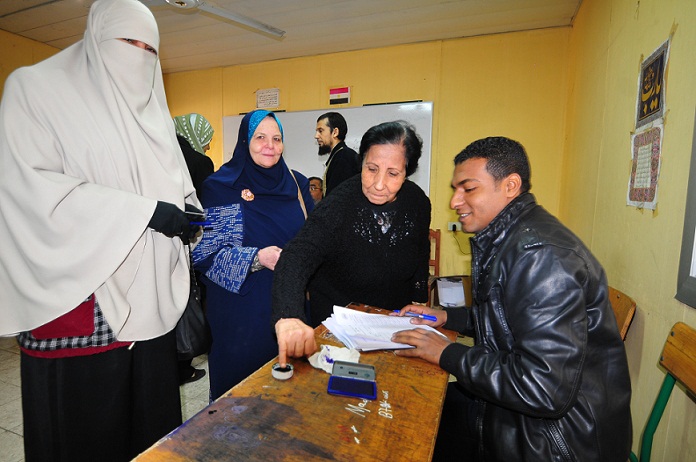 Egyptian women have emerged as leading critics of the referendum process. The Ombudsman’s Office at the National Council for Women received over 340 complaints, mostly from women, concerning a spectrum of polling violations that were witnessed during Saturday’s vote.

“Most of those who report incidents and call in to the media are women,” said Tassent Moussa, operations officer at the Ombudsman’s Office. “I think it is a positive indication that the level of awareness among women about their civil rights is beginning to be higher than men’s. This is only my opinion, but maybe men are not used to such tools. Men are used to raising their voices and fighting, but women prefer to go via the legal route.”

The Ombudsman’s Office is a bilateral programme supported by both the NCW and the European Union. It acts as a go-between for professional lawyers and advocates at the NCW and the women of Egypt. In preparation for Saturday’s vote, it set up a website, a fax line, a landline, and two mobile lines to receive complaints. The complaints came flooding in.

Moussa described the type of complaints received, “they didn’t find their names in the list, others found that some other people signed for them and at some electoral committees there were no judges.”

In addition to these complaints, there are issues unique to female voters. State-owned news agency MENA, reported incidents when veiled women were told to show their faces to ensure their identity, but were not provided with a female judge to reveal themselves too.

Particularly vulnerable to manipulation were illiterate women. Moussa told the story of one woman who could not read so she asked the women next to her for assistance. “The second lady said, ‘let’s ask the judge.’ When they went inside the judge dismissed both of their votes.”

The NCW is by no means neutral. “As an entity that is working on women’s rights, we reject this draft constitution,” Moussa said. The organisation has stated that the constitution needs to include text to combat cultural traditions that are harmful to women, the criminalisation of denying women’s inheritances and 40 per cent quotas for political representation, amongst other issues.