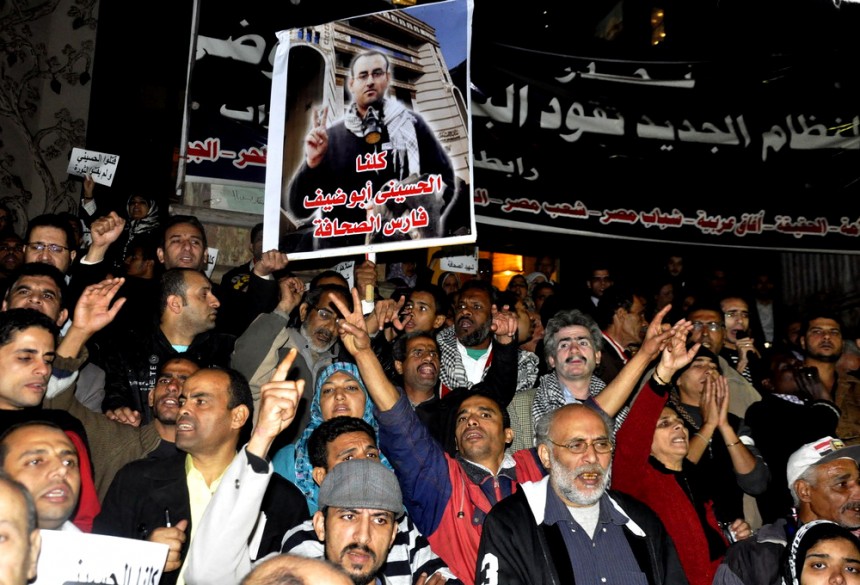 Abu Deif was killed during the deadly clashes which took place at the Presidential Palace almost two weeks ago between pro and anti-Morsy demonstrators. Abu Deif’s friends and family insist he was assassinated for taking photos which show Muslim Brotherhood supporters beating anti-Morsy protesters.

“This day shall be dedicated to monitoring violations against journalists,” Syndicate board member Abeer Saady said.

Saady had earlier stated that Abu Deif was the one who introduced the idea of celebrating the World Press Freedom day within the syndicate. The day is celebrated on 3 May.

“The Martyrs Hall and the Training Hall in the syndicate shall also be named after Abu Deif,” Saady said. She stated that the latter was the last hall Abu Deif visited before his death. He was attending a training course in video recording, held at the syndicate, before taking off to cover the Presidential Palace clashes.

Saady also mentioned that following talks with the governor of Sohag, the governor decided to name the street where Abu Deif’s family lives after him. Abu Deif was originally from Sohag.

The decision was taken during an emergency syndicate meeting held Sunday at Al-Wafd newspaper’s headquarters in Dokki. The choice of meeting place was a form of solidarity with the newspaper, which was attacked Saturday by a Salafi group allegedly affiliated with disqualified presidential candidate Hazem Salah Abu Ismail.

Abu Ismail denied any responsibility for the attack on Al-Wafd. He is, nevertheless, camping outside Media Production City alongside his supporters, where they have remained for almost two weeks. They are calling for a “reformation of the media.”

Emad Mubarak, lawyer and director of the Association for Freedom of Thought and Expression (AFTE), stated that such violations are a vicious attack on freedom of thought and expression.

“If there isn’t a clear stand against such actions,” Mubarak said, “then we will be dragged to a dark era.”

Mubarak believed that the crack-down on media outlets and practitioners is all but the first step in a string of attacks on other institutions.

“If we’re to see the latest violations within the context of the draft constitution, we would find that the articles addressing newspapers, Non-Governmental Organisations (NGOs) and workers’ syndicates, all state that closing down those institutions is possible through a court ruling,” Mubarak said. He saw this as an indication that the current authorities hold a grudge against media outlets, NGOs and workers’ syndicates.

Several media practitioners and freedom rights advocates have been protesting the lack of freedoms present in the draft constitution currently put to referendum. At least a dozen newspapers held a one-day blackout two weeks ago to demonstrate their objection to the constitution.