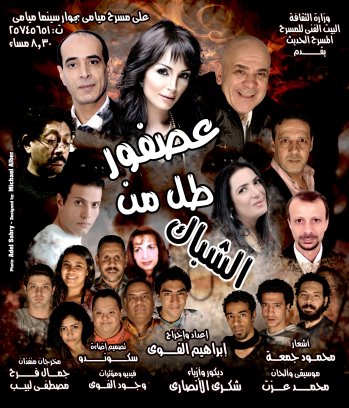 Cairo’s Miami theatre will see an Arabic adaptation of Ken Kesey’s 1962 classic One Flew Over the Cuckoo’s Nest, with a number of special needs actors participating in the new performance.

The performance will open this Wednesday at 9pm and will be attended by the president of El-Beit El-Fanny lel Masrah, the authority that oversees state-owned theatres, Maher Selim. The performance will be called Asfour Tall Men El Shebbak. The title gives a similar meaning but is also a play on the name of a famous Arabic song.

Kesey’s original plot takes place in a mental health institution, kept in order by a nurse the main antagonist, who subdues the patients and keeps them in line. The plot advances when one patient, played by Jack Nicholson in the famous Milos Forman film adaptation, challenges the nurse and the system of the institution.

The director of the play, Ibrahim Elfawy, said he chose the text because he wanted to establish the idea of successfully adapting an artwork from one form to another. He added that the central theme of freedom was another reason for his choice.

Hamdy Heikal, the manager of the modern theatre group, has expressed his joy that this “unprecedented” work has come to Egyptian theatres, in which special needs actors and professional actors work together.