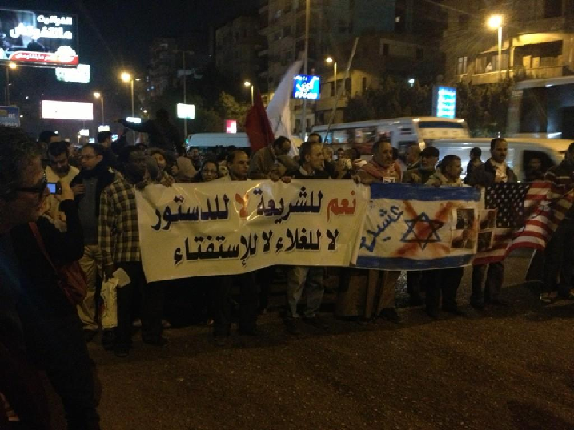 Opposition groups have led marches to Tahrir Square and the presidential palace ahead of the second phase of the constitutional referendum.

Protesters marched from Al-Nour Mosque in Abbaseya and Rabaa Al-Adawiya Mosque in Nasr City on Tuesday, converging on the presidential palace.

By five in the afternoon, dozens of people had gathered around the Rabaa Al-Adawiya Mosque. The crowd chanted that they were neither infidels nor atheists and called for the fall of the Muslim Brotherhood’s Supreme Guide Mohamed Badie, President Mohamed Morsy and “the regime” as a whole. Numbers increased into the thousands during the evening.

Other demonstrators from Dawaran Shubra and Mostafa Mahmoud Mosque in Mohandessin met in Tahrir Square to convey their anger over alleged electoral violations that took place in the first round, demanding a delay in voting for the rest of the 17 governorates scheduled to vote on Saturday.

Roughly 100 protesters gathered near the Mostafa Mahmoud Mosque before the crowd marched towards Tahrir Square gathering momentum as the march progressed. The crowd also called for Morsy and the supreme guide’s fall.

“Shave your beard and show your shame, your face is Mubarak’s face,” protesters chanted.

The opposition National Salvation Front (NSF) released a statement on Monday, condemning the first round of the referendum for irregularities and inadequate judicial oversight. It called for the postponement of the second phase of the referendum until an agreement is met that allows more judges to take part in supervising it.

“The NSF appeals to the great masses of our people to continue to rally and prepare to vote ‘No’, to drop the draft constitution that has ravaged our fundamental rights,” read their statement.