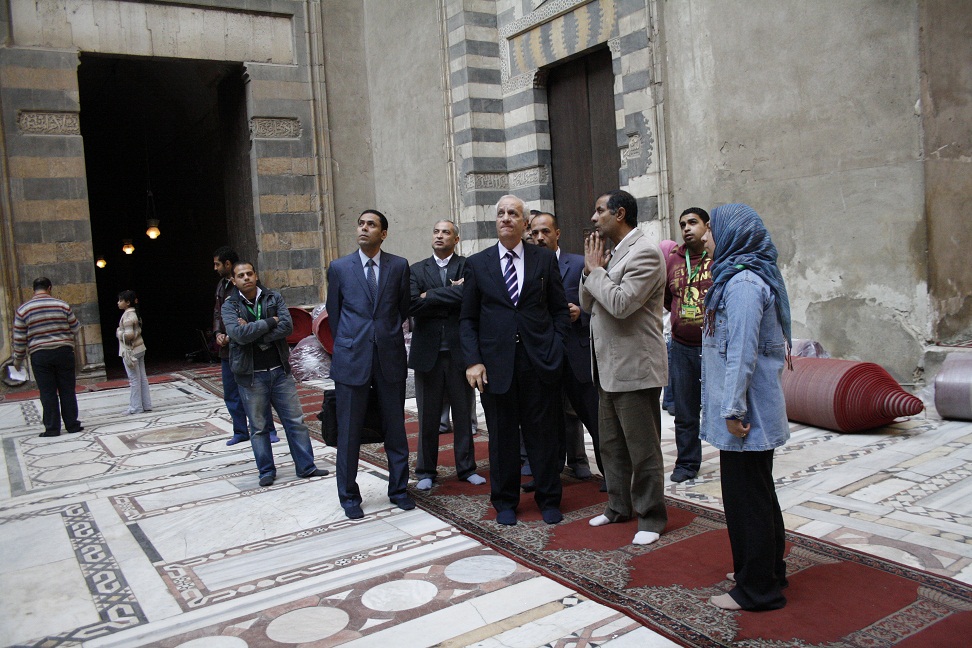 The Sultan Hassan Mosque complex is undergoing renovation by the Ministry Of Antiquities in an effort to revive Old Cairo and renovate major mosques. The complex is considered not only a landmark of Cairo but one of the finest examples of Mamluk-era architecture.

The dome is notable for its unusually elongated egg-like shape and when the mosque was completed it was considered to be unrivalled in size or grandeur in Egypt.

The complex is considered to be one of the most expensive ever built in medieval Cairo, despite the lack of lavish design inside the mosque. Instead, the expenses went into the maintaining the huge complex and its size, unusual at the time. It stands in the shadow of the majestic citadel which overlooks all of Cairo.

The mosque was intended to be the Sultan’s final resting place but he died before the mausoleum was completed, leaving the mosque’s original purpose unfulfilled.

The minister of antiquities visited the complex to oversee the renovations and has stated that the neighbouring former headquarters of the National Democratic party must also be made better use of.

Among the renovations planned and in progress is a complete overhaul of the electric system, as well as installing modern cameras to allow for a central surveillance room to monitor the landmark.

The cost of the camera system is EGP 78,000 with EGP 20,000 coming from the board of administration of the mosque, headed by Mufti Dr Ali Gomaa. Other plans include fixing the electronic gate as well as laying new carpets for the mosque.

The minister stated that he would like to see a library of Islamic heritage established at the complex as well as up to date services for both Egyptian and foreign visitors.

The complex will see other renovations in the form of the intricate woodwork and marble carvings that are found all around the monument as well as installing nets the windows to prevent damage from birds.

The renovations are expected to go on for some time but the mosque is easily accessible, both for prayer and as a tourist attraction all year long.