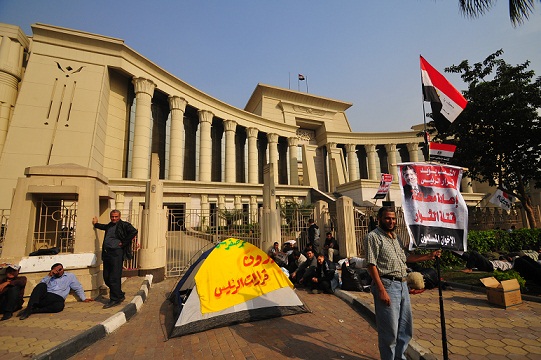 The State Council Judges’ Club released a statement on Monday night, formally apologising for not taking part in the second phase of the referendum, set to be held next Saturday.

State Council judges announced they will not be overseeing the second phase of the referendum for several reasons including, the ongoing sit-in outside the Supreme Constitutional Court.

Zaghloul Al-Belshy, head of the Supreme Electoral Committee, said that he received no apology from the State Council judges, according to state-run Al-Ahram. He added that if they do not oversee the second phase, it will not be a problem because there are reserve judges who can replace them. Al-Belshy said that it will be announced to the public if there are not enough judges to oversee the referendum.

In response to the State Council judges’ withdrawal, the National Salvation Front (NSF) called for the second phase to be postponed.

The opposition bloc claimed the withdrawal of the judges makes “judicial supervision impossible.” It added that it invalidates the claims of the Supreme Electoral Committee regarding the presence of a sufficient number of judges, “which has not been proven in the first phase.”

Speculations about whether or not it is judges, who are overseeing the referendum or just employees at judicial institutions, have been widespread. The NSF claimed it has now been proven beyond doubt that the integrity of the referendum needs to be guaranteed and warned about conducting the referendum without proper supervision.

Seif El-Islam Hammad, human rights lawyer at the Hisham Mubarak Law Centre said that transparency regarding this issue is very important. The NSF has also called on the Supreme Electoral Committee to announce the names and numbers of judges overseeing the referendum and how they are distributed. It called on the committee to avoid repeating the blackout which happened in the first phase allowing violations to happen.

The opposition bloc said that there were enough violations to invalidate the first phase of the referendum, insisting the committee should take them seriously. Al-Belshy said the committee has asked for three judges from the Ministry of Justice to study the complaints regarding the first phase.

The State Council judges had announced ahead of the referendum that they will supervise, provided certain conditions are met.

Among the conditions, was to end the sit-in outside the Supreme Constitutional Court.

“The club was surprised that the promises and undertakings turned out to be a mirage… to legitimise the supervision of the referendum…” the State Council judges said, adding that this became apparent when the Supreme Constitutional Court was “besieged” again.

Last Sunday, the court was “besieged” when a large protest was held outside, continuing the sit-in that had started earlier in the month by supporters of President Mohamed Morsy.

The next day, judges at the court announced that they were postponing work until further notice.

“Why hold a referendum on a constitution while the court which will implement it, and apply it, is shackled?” the State Council judges said.

Another condition the judges claimed was not met, included life insurance policies which they demanded the state should provide, in order for them to oversee the referendum. The judges allege that they have received promises the policies would be provided, but nothing has come of it.

The judges’ conditions also included putting an end to the bloodshed and fighting between Egyptians and ensuring no campaigns are held outside polling stations. They also retained the right to withdraw from overseeing the process if they face something which could jeopardise their dignity or independence.

The first phase of the referendum was held last Saturday and included 10 governorates. Voters in the remaining 17 will get to vote in the second phase. Official results have not been announced yet.