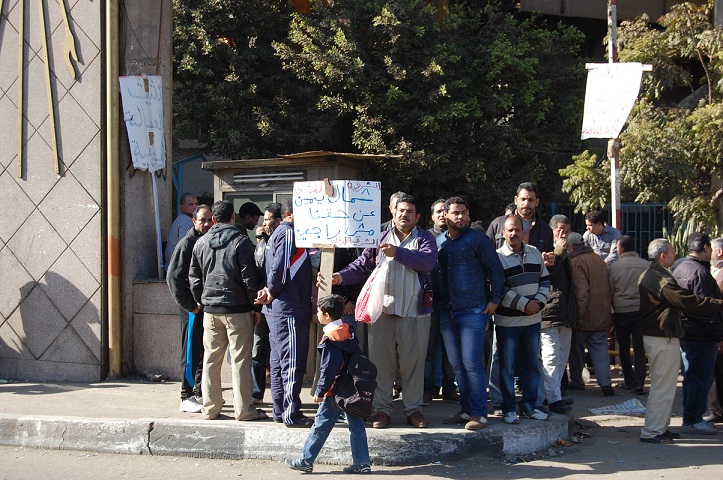 Hundreds of workers of the Eastern Company for Tobacco entered the second day of their strike on Tuesday, demanding better wages and work conditions.

The strike comes after the company’s administration rejected the workers’ demands, who have accused the company’s CEO, Nabil Abdel Aziz, of corruption.

Workers stood in front of the company’s headquarters in Giza, blocking the adjacent street, before allowing cars to pass through again. Meanwhile, two Central Security trucks stood guard a short distance from the main entrance.

Around 14,000 employees work for the company’s different branches, according to the Egyptian Centre for Social and Economic Rights.

Amr Khedr, director of services department at Eastern Company for Tobacco and one of the workers on strike, said they were taking action because their demands, which they submitted to the company’s administration and CEO, were completely disregarded.

Khedr added that they are demanding a rise in wages, family health insurance and permanent work contracts for temporary workers. He explained that the company has three types of workers; those with permanent contracts, temporary contacts and others who have no contracts and are paid on daily basis.

“Most of the temporary workers have been working for the company for more than four years and they have not received permanent contracts yet,” he said.

By law, temporary workers should receive permanent contracts, including health insurance and a rise in wages, after they have spent three years working for the same company.

“The other workers are paid EGP 25 daily. They have no contracts or health insurance,” said Khedr. He added that many of these workers pay for their own medical treatment if they receive a work-related injury.

Samir Salah, operations technician, said he has been working for Eastern Company for Tobacco for 27 years and his salary was EGP 1900. “Despite that, I am not striking for my own interests. I am striking for the sake of the daily workers who are thrown into hospitals for months with no money and no support from the company’s administration,” he said.

Regarding salaries, Salah said the maximum salary a worker could earn before reaching retirement age is EGP 3000. “What would a 60 year-old man do with EGP 3000? Is this money enough for feeding his kids, or educating them, or treating them?” he asked.

Sameh El-Ganzoury, a production supervisor who is also on strike, said the company is Egypt’s second largest source of national income after the Suez Canal, claiming that a large portion of its revenues is embezzled by its high board personnel. He claimed the company’s losses after three days of strikes would be EGP 300 million, which is equal to the sum of their demands.

Saeed Abdel Salam, a temporary worker on strike, said he received a work-related injury a few months ago but the company did not pay for his medical treatment and rebated his salary during his recovery.

Dalia Moussa, a workers’ communication coordinator at the Egyptian Centre for Social and Economic Rights, said the workers have legitimate rights that they are entitled to. She added that their demands were being ignored and all branches of Eastern Company for Tobacco in Egypt were participating in the strike.

Moussa said the company is benefitting from the current situation, adding that daily workers do not cost the company money for insurance or taxes. “With more daily workers, you get more work and you pay less taxes and insurance fees. That’s how they make a lot of profit.”