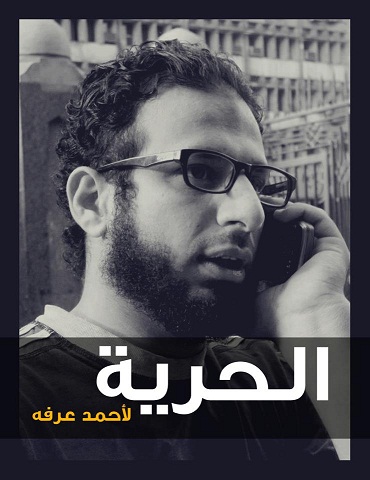 Police investigation officers arrested a member of Hazemoon Salafi group on Wednesday, on charges of being responsible for the attacks on Al-Wafd party.

Ahmed Arafa, an engineer, was arrested early Wednesday morning, while his mother claimed that police forces stormed the house without a warrant.

On a video broadcast on YouTube, Arafa’s mother said more than 10 police officers broke into the house, beat her and her son, and took his laptop, car and mobile phone. She added that the officers told her they had a search warrant, but that they refused to show it. “My son rarely participated in any protests. He is peaceful and he did not harm anyone. My message to Morsy is: don’t let these people treat us like this again.”

The official Facebook page of the Egyptian police stated that the public prosecution office issued a warrant for Arafa’s arrest and to search his house, for allegedly owning a firearm. The statement said a firearm was found in Arafa’s house, denying that any violations occurred during his arrest.

The Facebook page, “Where was Abu Ismail before the revolution?” posted a statement claiming Arafa did not participate in the march that attacked Al-Wafd party and newspaper on 16 December. The statement asserted that Arafa was at work at the time.

The page also claims that police officers at Nasr City police station refused to file a complaint regarding the alleged violations conducted by the officers who arrested Arafa, but that they finally agreed to after pressure from Arafa’s family and Hazemoon supporters. The statement said Arafa is currently being investigated by Nasr City prosecution office, calling readers to standby for a predicted mass demonstration.

Salafi Front Facebook page stated Arafa is one the admins of the “Where was Abu Ismail…” page.

Gamal Saber, spokesperson for Hazemoon, claimed he does not personally know Arafa, adding that it is no longer acceptable to detain citizens without legal permission. “Even if they had a warrant, is it acceptable to beat him and his aging mother?”

Saber said he condemned attacks on freedoms and rights of any Egyptian, not only Arafa.

State-run Al-Ahram reported claims by Ahmed Samir, a member of Abu Ismail’s presidential campaign, who said Arafa was not the only member of Hazemoon to be arrested. Samir claimed that another member, Sherif El-Hosary, was also arrested on the same day.

Samir added that Abu Ismail ordered his supporters to refrain from conducting violence or holding any protests supporting the detainees, saying there is a plan to drag Islamists towards violence.

Saber further stated that Abu Ismail is currently considering several options in response to the incident.

Opposition groups also condemned the incident. The Popular Current issued a statement on its Facebook page that read, “Despite our clear political disagreement, and despite our rejection to the actions they conducted during the past weeks [including attempts to besiege our headquarters], we announce our support to Ahmed Arafa and condemn his arrest and attacks on him and his mother.” The 6 April movement also issued a similar statement online.