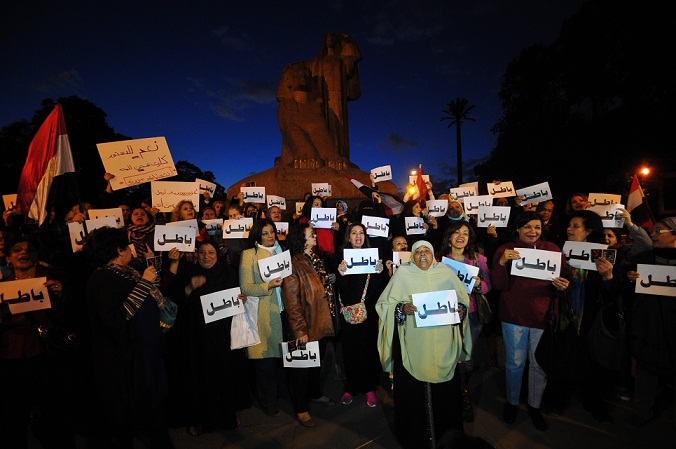 Dozens of women gathered at Al-Nahda Square in Giza on Wednesday evening, in a campaign against the constitutional referendum and the proposed draft. Demonstrators held up signs reading “void” in reference to the constitution which they claim infringes their rights and discriminates based on gender.

The group also distributed flyers highlighting the specific issues with the current draft.

The women’s rights group Baheya Ya Masr, who organised the demonstration, called it as a “rejection of the void referendum and a confirmation of our commitment to our ancient civilization, our ancient history and continued struggle,” adding that the protest was a cry for “freedom, justice, and human dignity.”

“We said bread and freedom, and they call us thugs,” said the protesters, addressing the manner in which the Muslim Brotherhood has painted many opposition forces.  The demonstrators also carried Egyptian flags and wore stickers reading “No” on their shirts.

“We are gathered here as women to protest against the constitution, which is against us,” said Fatmy Khafagy, a women’s rights activist. “It’s against women, children, the poor, the judiciary, and many other things.”

“Ever since [the Muslim Brotherhood] came to [Tahrir] Square, they’ve insisted on doing things their way. Whenever they want to appoint women representatives, they take them from the Freedom and Justice Party,” she said.

Khafagy added, “[The Constituent Assembly] removed the mentioning of human trafficking. This harms the children in poor areas who are sold into marriage to Arab men, before they have the chance to go to school and mature. This needs to be addressed.”

Shereen Ibrahim, a woman in her 20s who also joined the demonstration said, “I have hope that Egyptians in the other governorates will understand that this constitution is unacceptable.”

The second stage of the constitutional referendum will take place on Saturday across the remaining 17 governorates, including Giza, which did not vote last week.