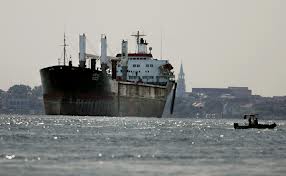 By Hassan Ghonema and Connor Molloy

Workers at the Ain Sokhna Port have restarted their strike in protest at the dismissal of seven employees, which the workers say was a union breaking measure.

The striking workers are demanding a meeting with management and a fulfillment of earlier promises, which were made to end an October strike at the port.

The port is still operational as of Thursday afternoon, but about fifty workers have gathered inside the port and are calling for more to join them.

Mohammed Abdul Ghani, a laid-off worker, said that the management company Dubai Ports World (DPW) has postponed a promised resolution until next Monday, angering workers who consequently began their sit-in and are threatening escalation if the problem is not resolved.

In October two presidential representatives were sent to the port to push through a settlement between striking workers and DPW. That strike prevented Chinese and Swiss ships from working for over ten days, and only finished when workers were promised a timetable for the restructuring of employment and a legal investigation into the recent dismissals.

These promises have not come to been met in the two months since they were made.

The Governor of Suez also promised in October to form a standing committee to resolve future problems between workers and management at the Ain Sokhna Port, in an effort to establish mutual respect between the two sides.