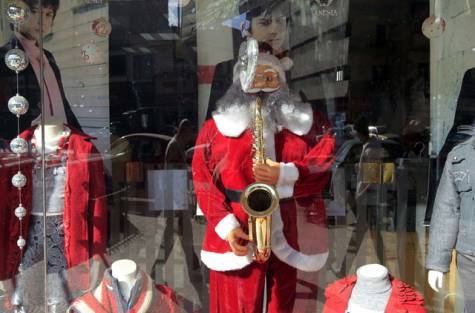 Any excuse to throw a party is good enough for Cairenes, but in a city where the majority of the city’s population does not celebrate Christmas, the number of Christmas parties taking place over the weekend is still surprising.

It seems that the city’s venues, specifically those in hotels, are gearing up for a weekend of Christmas-related activities. The events vary from Christmas-themed parties to bazaars and Christmas carols concerts.

Among the places hosting events are the O bar, Tamarai and Amici. There is a children’s Christmas party at Art cafe, a Christmas bazaar at Bikya, another one at Downtown Katameya, a Christmas flea market at Designopolis, a party and the Nutcracker at the Opera House and two “end of days” parties.

And yet Christmas is not even celebrated in Egypt the way it is celebrated in the west. Even among Egyptian Christians, most of whom are adherents of the Coptic Orthodox church and celebrate eastern Christmas on 7 January, the holiday does not hold much cultural significance.

In fact, Sham El-Neseem, an ancient Egyptian holiday to mark the arrival of Spring, is still celebrated to this day, and holds much more sway among Egyptians but you would be hard-pressed to find a Sham El-Neseem party at the Cairo Jazz Club.

The Christmas craze is nothing new, Halloween sees Maadi go out trick or treating and parties start popping up everywhere, with mandatory costumes.

In the upscale neighbourhoods, you will find Christmas trees and decorations being sold at most shops, TV stations who broadcast in English, like Fox and MBC2 will start showing Christmas films, and private schools will hold Christmas concerts where the kids will sing “traditional” Christmas songs. AUC has also traditionally held an annual Christmas carol concert.

Despite all of this, most of Cairo does not seem to ascribe much importance to Christmas; there are no special plans for most people, no shopping season, no religious significance and no holiday.

There is a class factor to consider in this cultural phenomenon; most of the places holding the celebrations tend to cater to higher-income Egyptians and businesses are among the first to cash in on the few celebrations.

Even with the exclusivity of these celebrations, there will still be one or two street vendors selling China-made Christmas decorations in what is perhaps the only sign that Christmas culture is permeating our own in any real way.

Why is it that the city does not come alive at Christmas time the same way it does with Ramadan or Sham El-Neseem, and yet the culture scene does?