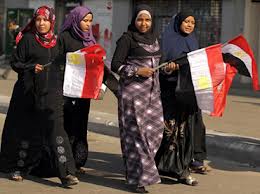 The National Council of Women (NCW) have condemned the Ministry of Education for its investigation of a student.

Rana Al-Sayed, a 17 year old student, said she was summoned to her school principal’s office, where she was questioned by members of the Ministry of Education for her participation in an march to Tahrir Square last Tuesday, in protest against the referendum and draft constitution.

Mervat Al-Tallawy, Chair of the council, said the group stood by the student and have allocated a lawyer to follow up on the incident in order that “peaceful protest is guaranteed to every citizen.”

Other groups, including the 6 April Youth Movement have expressed support for the young student’s right to protest.

In an interview on MBC, Al-Sayed said she and classmates joined students from other schools to participate in the protests that were taking place in Cairo, stressing that their schools were in no way involved in organising or mobilising students.

She said the two ministry workers who came to her school to talk to her asked about her participation and which of her classmates joined her.

A ministry employee then asked her about politics, questioning her reasons for going to protest and her view of President Mohamed Morsy. Al-Sayed claimed that the ministry had found her because of a quote she gave to independent newspaper Al-Masry Al-Youm during the march. She said she stood by the quote mentioned in the article, in which she criticised the make up of the Constituent Assembly and encouraged Morsy to listen to the demands of the protesters.

Her father Sayed Fouad said the school and its administration stood by his daughter, and believes that the root of the problem came from the ministry demanding to summon his daughter for something he claimed did not concern them. Foaud suggested the ministry employees had political motives in pursuing the matter.