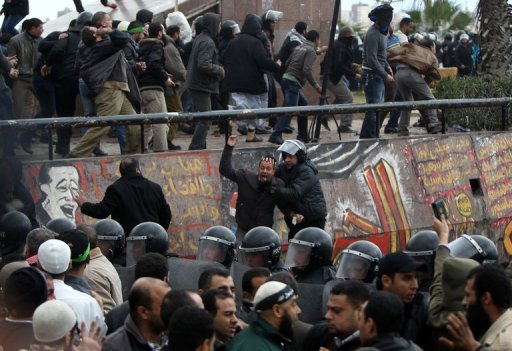 Clashes in the vicinity of Al-Qa’ed Ibrahim Mosque have escalated with the Ministry of Health announcing at least 37 injured.

At least two buses used for transporting Islamists have been set on fire, alongside a private-owned car, reported state-owned Al-Ahram. Civil Protection Administration’s manager in Alexandria Emad Kheir told state-owned news-agency MENA that unidentified assailants had destroyed a fire truck and prevented it from reaching the burning cars. According to MENA, a number of protesters set the cars on fire, claiming that they have been used to transfer Sheikh Ahmed Al-Mahallawy’s supporters.

Al-Mahallawy, who was trapped in the mosque for almost 15 hours last week after urging those praying to vote ‘yes’ in the referendum, again led today’s Friday prayers. He told Al-Jazeera Mubashir Misr that the clashes were ignited to stall the second round of the referendum due to take place Saturday.

“We haven’t been able to achieve anything throughout the past two years due to similar acts of sabotage,” Al-Mahallawy told Al-Jazeera, blaming “thugs” for being behind such acts. He added that if people approve the draft constitution, stability would return.

Security forces and Islamist protesters withdrew from the clashes shortly after the fires began, reported Al-Jazeera. Opposition parties such as Al-Dostour party and the Popular Current denied taking part in the clashes. The Freedom and Justice Party’s facebook page in Alexandria stated that Islamist protesters were attacked by supporters of the National Salvation Front. The page cited eye-witnesses claiming that around 350 “thugs” from the “militias of the Popular Current, Kefaya movement and opposition figure Abul Ezz Al-Hariri’s supporters are staging fights with Islamist protesters”.