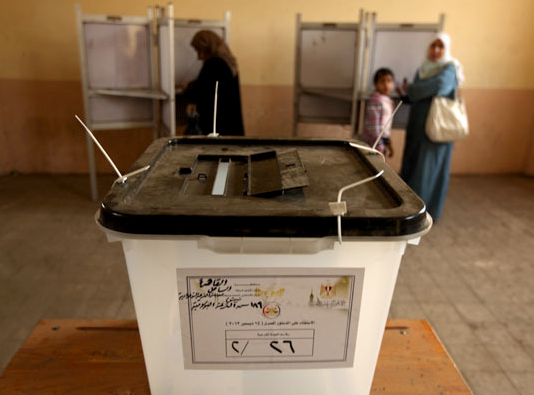 Mohamed ElBaradei, the coordinator of the National Salvation Front (NSF), the country’s largest opposition bloc, called on everyone to vote ‘No’ to the draft constitution.

ElBaradei said that the draft constitution allows the trails of civilians before military courts and threatens judicial independence, among other issues. He described the draft as disfigured and without a vision.

“Our goal is not that Morsy leaves, our goal is that the country moves on. The country is on the verge of bankruptcy, I am sorry to say, if we manage to make it for three months, we will not make it for four,” he said.

“Return the 1971 Constitution, form a new assembly to draft a constitution for all Egyptians, form a government with competent people… the ballot box is flawed because it is tainted by rigging,” ElBaradei said.

Also on Thursday, the NSF called on the Ministry of Endowments to tell Imams of mosques to avoid discussing political matters during Friday prayers. “Both ‘Yes’ and ‘No’ are political stances that have nothing to do with religion, heaven, or hell,” the opposition group said.

The NSF’s call comes ahead of the second phase of the referendum, which will be held next Saturday. Violence broke out for the second week running in Alexandria outside Al-Qa’ed Ibrahim Mosque. The week before clashes erupted after Sheikh Ahmed Al-Mahallawy discussed the referendum after Friday prayers at the mosque.

The NSF said, despite the violations that have taken place under the absence of full judicial oversight, it is still fighting the battle of voting.

Some of its members met Aly Erfan, member of the Secretariat of the Supreme Electoral Committee, on Wednesday to discuss judicial oversight of the referendum.

They called for allowing all observers who have the observer cards to monitor the voting process starting from opening the ballot box to closing it and counting the votes.

Additional demands included the release of the names of all judges and which polling stations they will oversee, as well as the requirement that judges hang their identifications cards around their necks.