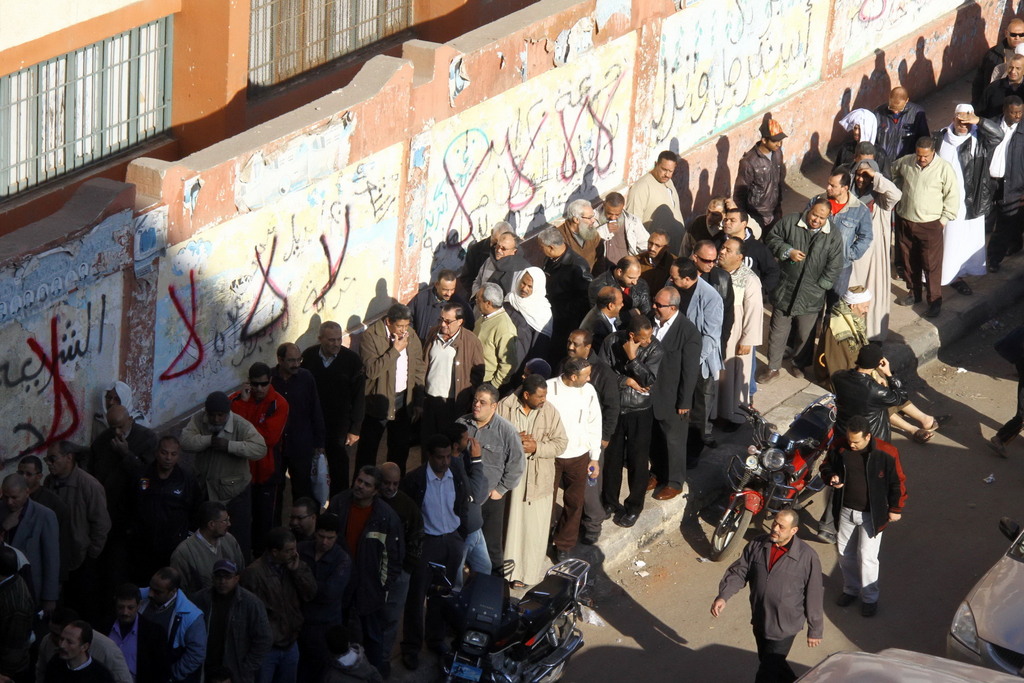 People queued at the polling stations Saturday as the second stage of the referendum on the draft constitution got underway.

Voters of different ages and backgrounds lined up to cast their votes in a relatively quiet atmosphere. Opponents and proponents of the constitution were almost equally present, and almost all voters had a justification for their choice.

“Of course I’m voting ‘Yes’,” said Ayat, a fully veiled female voter, while standing in line outside the polling station, “I want Islamic Shari’a to be implemented so that those girls walking in the street can be guided towards Allah’s path.” She was referring to girls who do not strictly abide by Islamic dress.

Ayat, who preferred not to reveal her last name, said that she is generally familiar with the articles of the constitution, but that she hadn’t read the full draft. “It is sufficient for me that the president knows the Quran by heart and that his wife is wearing Islamic dress. Anybody would be proud if this constitution is implemented in their country.”

Ayat said that being veiled isn’t the reason why she wants Islamic Shari’a implemented. She said that a number of Coptic Christians also want to implement Shari’a because it’s a system which serves all faiths.

Another proponent of the draft constitution was Noha Za’za’, a German Language professor at Cairo University. Za’za’ stressed that she doesn’t belong to any Islamic movements. “I will vote ‘Yes’ because I have read the draft constitution and heard the false accusations about it.” Za’za’ expressed her full support to the members of the Constituent Assembly and her faith in President Mohamed Morsy.

“I believe Morsy is stalled from action,” she said, adding that stability is needed to allow him to work.

Nada Sabry, a young, unveiled woman said “I will definitely vote ‘No’.” She said the main problem with the constitution lies in the uneven formation of the Constituent Assembly. She also cited a number of points she has against the draft itself; the absence of clearly outlining women’s rights, allowing girls to be married before they turn 18 years old and allowing child labour. “Honestly, we will always just go against what those currently in power want.”

Sabry said she expected the final result to come in favour of the constitution. She nevertheless added that so long as people exert enough effort to make their voices heard, “God shall support their cause.”

An elderly woman who refused to reveal her name said she voted in favour of the constitution after reading it and finding no faults with it. “I’m neither with the Muslim Brotherhood nor with the National Salvation Front. Everyone is pursuing their personal interests, while the country is getting lost.”

Mai Abdel Hafez, an unveiled young woman, said she would vote against the draft constitution. “The article necessitating that science is practiced only in Arabic is enough of a turn-off for me.”

Alaa Al-Sayed, a middle-aged man, said he rejects the draft constitution for several reasons. Al-Sayed said the constitution only serves a certain faction of Egyptians, leaving out the rest.

Ahmed had brought his small children along to the polling station. “I want them to get used to the process. Besides, they enjoy coming here.”

Salah Hussein, a middle-aged man said “I want to do the right thing.” Explaining why he will vote “Yes.”

The second and final stage of the draft constitution includes the Giza governorate alongside 16 other governorates. The 10 remaining governorates voted on the constitution during the first phase last Saturday. The official results of the first round haven’t been announced yet.

Preliminary results suggest that “Yes” votes won the first round with a simple majority.