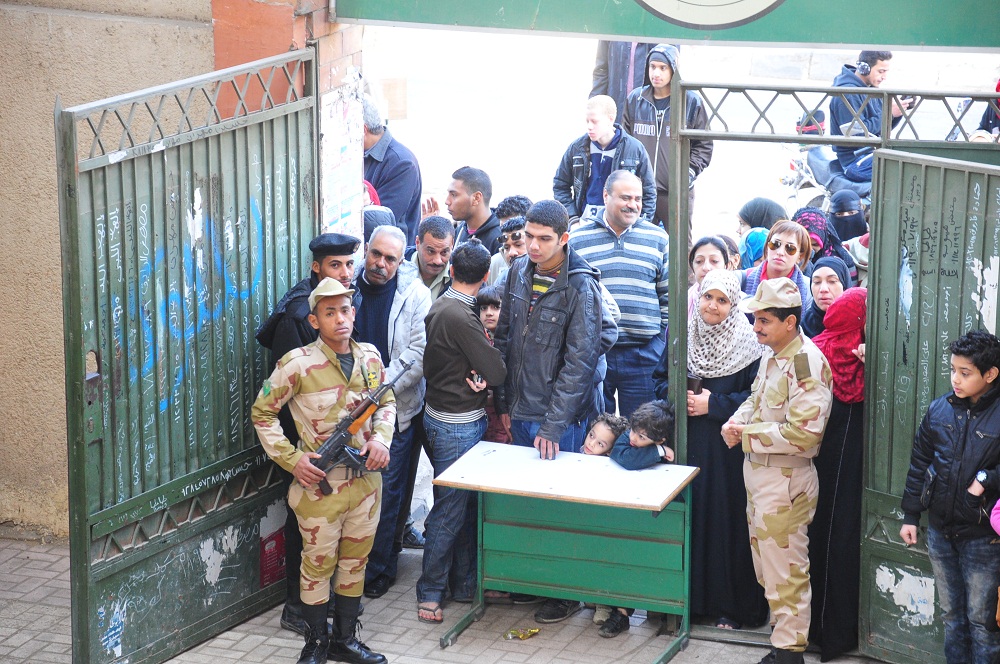 There have been several incidents of Coptic Christian voters, including entire villages with a majority Coptic population, being prevented from voting.

“The Front demands that the Supreme Electoral Commission investigate these claims and resolve them if proven right due to their adverse effect on national unity. It also calls on those responsible for security either from the police or the military to quickly go to these areas in order to prevent any possible clashes,” an NSF statement read.

Egypt’s largest opposition bloc also called on the leaders of the Muslim Brotherhood and other Islamist groups to reign in their followers and stop them from preventing Christians from voting.

“These actions are bound to cause sectarian strife. Despite our political differences we are all concerned about the safety and unity of the nation and must put an end to all actions disrupting national security.”

The NSF released six reports out of its referendum monitoring operations room throughout the day, and by 4 pm, the Front had listed over 200 violations.

“We have listed over 700 violations so far. The amount is fairly similar to that of the first round,” said NSF monitoring official Maha Abdel Nasser.

There were administrative violations as well including several stations opening late, ballots not being stamped with the official seal and official voter registration lists missing names.

The NSF reported that members of the Muslim Brotherhood in the 17 governorates where voting took place coerced and directed people to vote “yes” for the constitution.

Female employees refused to properly check the identity of women wearing Niqab and by not asking them to take off their face veils. It was also reported that in some voting stations, the phosphorous ink voters were meant to place their fingers in was either too thin and did not leave a strong enough mark or left no mark at all.

Judges would slow down the voting process in stations where the majority of voters were Coptic Christians or voting “no” to the constitution, the NSF reported.

Cars and busses belonging to the Muslim Brotherhood and its political wing, the Freedom and Justice Party were witnessed transporting large amounts of people for group voting at polling stations, all for the constitution.

Several polling station supervisors refused to show identification proving they were judges while others closed down stations for prolonged periods of time for either eating or praying.

A member of the Muslim Brotherhood was arrested in possession of a laptop inside a polling station in Giza where he was directing voters to vote “yes.” The judge refused to file election monitors’ complaints against him and open a case, instead ordering his release.

In several other stations judges kicked out election monitors from the NSF and civil society organisations, allowing only those that belong to the Muslim Brotherhood. In one station a child was entrusted with stamping the ballots, rather than a judge and another had two separate boxes for “yes” and “no” votes.

The NSF has called for a press conference Sunday to further discuss the violations. Front leaders such as coordinator and Nobel Laureate Mohamed ElBaradei, former Arab League Secretary General Amr Moussa and Popular Current leader Hamdeen Sabahy are scheduled to make an appearance.