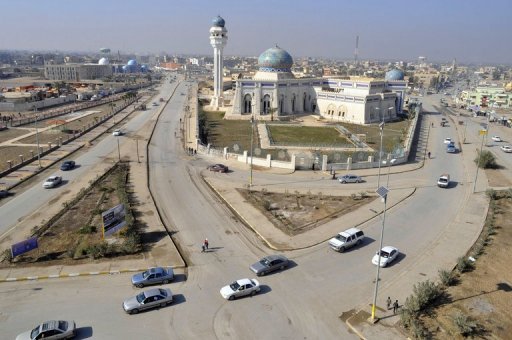 Ramadi, Iraq (AFP) — About 2,000 Iraqi protesters, demanding the resignation of premier Nouri Al-Maliki, blocked on Sunday a highway in western Iraq leading to Syria and Jordan, an AFP correspondent reported.

The protesters, including local officials, religious and tribal leaders, turned out in Ramadi, the capital of Sunni province of Anbar, to demonstrate against the arrest of nine guards of Finance Minister Rafa Al-Essawi.

Their arrest on terrorism charges has sparked a call from Essawi for Maliki to quit or be removed.

“We are gathered today not for Essawi and his bodyguards, but to change the course of this sectarian government and to overthrow Maliki’s government,” Anbar provincial councillor Hikmat Iyada told the protesters.

A letter from Sheikh Abdul Malek Al-Saadi, a leading Sunni cleric in Anbar, was read at the protest in which he called for Shiites in the government to respect Sunni officials, and the minority Sunni population in Iraq.

Maliki was also condemned in a separate statement issued by fugitive Sunni vice president, Tareq Al-Hashemi, who praised the demonstration.

“Maliki is a prisoner of a sick mind, obsessed with power,” said Hashemi, who has been handed multiple death sentences in absentia for charges he insists are politically motivated.

“The Islamic and Arab world looks at him now as the sponsor of the Safavid (Iranian) project in Iraq.”

Hashemi also called for a no confidence in the premier, accusing Maliki of aiming “to get rid of his opponents.”

Sectarian tensions are still significant in Iraq, which suffered years of brutal confessional violence in which tens of thousands of people were killed and many more forced from their homes.