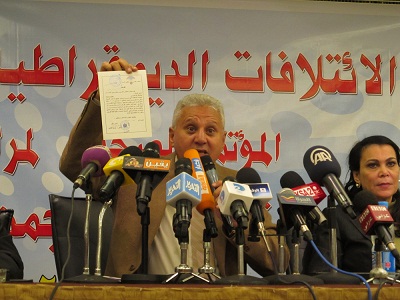 Representatives from the coalition announced a final statement on the results of monitoring the constitutional referendum in a press conference Sunday.

“We call upon the Supreme Committee for the Supervision on Elections to cancel the results of the referendum,” read the statement released by the Independent Coalition for Monitoring Elections (ICME).

The coalition includes 12 civil society organisations which monitored the elections in the first and second phases of voting.

The report stated that the widespread violations would have directly affected the results of the referendum.

“The results of this phase and the previous one don’t reflect the real opinion of the people,” the statement read.

Head of the Coalition, Magdy Abdel Hamid, displayed some ballot forms marked “No” and said they were found in the garbage or on the streets outside many polling stations.

He also had many signed observers’ permits with no names or ID numbers, “this was distributed among those who belong to the Islamists’ current,” Abdel Hamid said.

He added that The National Council for Human Rights was the one authorised to issue permits.

“The council is headed by Hossam El-Gheriany, who also headed the Constituent Assembly for drafting the constitution,” he said.

They stressed that the results should at least be postponed until violation incidents are investigated.

“We reported to the prosecutor general and the Supreme Electoral Committee and provided evidence. We are still collecting videos and documents from people,” said Azza Kamel, head of the centre for Appropriate Communication Techniques and Development (ACT).

The duty of rights’ groups was to monitor the elections and report violations, Magdy Abdel Hamid explained; he added that in case the constitution passed and violations were ignored, “any escalation would come from the political groups like the National Salvation Front and not rights’ group  … our work here is done.”

Ragia Omran, head of Shayfeenkom campaign, said that the violations reported were more than enough to annul the referendum.

“There were incidents of religious publicity, rotating ballot, electoral bribes, exploiting the poor and illiterate, the very slow process and many others,” she said.

She added that many stations closed and started counting ballots before the official time. Many Copts were also prevented from casting their votes, especially in Minya.

“Old methods like cutting out electricity were used to obstruct voters in some areas. There were also clashes between supporters of the constitution and voters,” she said.

“Three prosecutors were detained by armed men in Kerdasa… they were on their way to investigate reports they received about stations with no judicial supervision,” he said.

Negad Al-Boraei, rights’ activist and head of Democracy Development group said that if the results were announced then the investigations would be useless.

“We should seek UN supervision over our elections if the way they are managed remains the same,” he said.