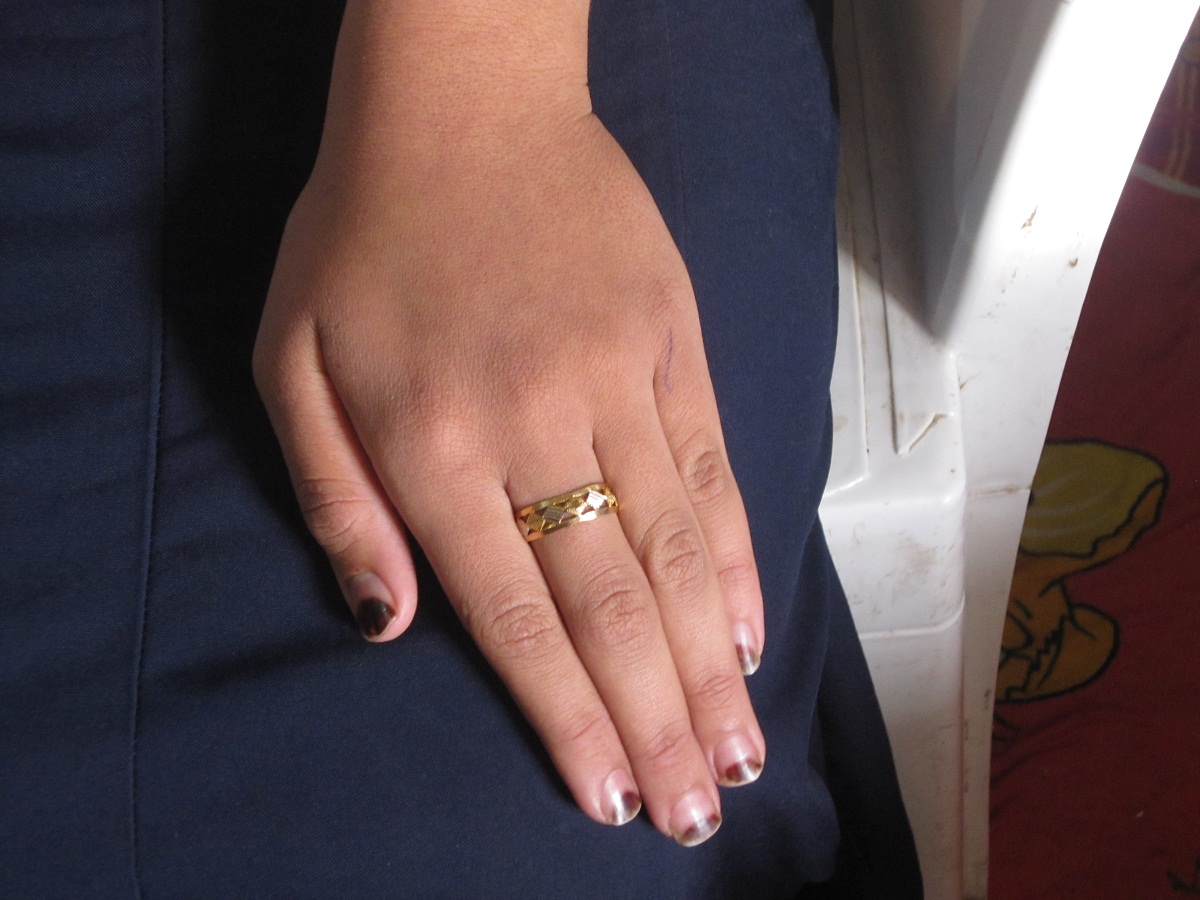 El Azizia village of El Badrashin district, Giza, is an archetype of Egyptian villages. A channel is dug along a bumpy road to irrigate the planted fields. Houses built on agricultural land overlook the channel and the road. Bridges of clay brick and wood connect the banks of the narrow channel, allowing people to move between their houses and fields.

Cars cannot reach that part of the village because the road is too narrow; tuk-tuks and donkey carts are the main means of transportation. Clear skies, local farmhouses, and fresh air are soothing, telling a different story than the one many families experience in the village.

Aya is 26 years old and lives with her family in the area. Wearing black galabeya adorned with glitters on her forearms, her matching headscarf frames her brown eyes and dark skin.  Behind her normal appearance and broken Arabic speech, however, is an ongoing tragic marriage experience.

Aya left her primary school in El Azizia to get married when she was 17. She did not know her husband or see him before because he was out of town; he was Jordanian.

“I did not know anything about life at that time let alone marriage. I was confused and frightened, but I had two failed engagements before him so my parents wanted to get rid of the unspoken questions our neighbours had,” says Aya.

Her husband saw her near the porch of her house, liked her looks, then came to ask her father for her hand in marriage.

“He was much older, 30 something. I did not know the nature of his work, but he seemed well off to some extent. He paid my father the dowry and promised to buy me gold when we go to Jordan, but that never happened,” she says.

Dalia Mansy is a project manager at Hawaa El Mostaqbal Association for family and environment development, an NGO that works to raise awareness of early marriage. She defines the marriage Aya was forced into as zawag el safka, literally “deal marriage.”

“Zawag el safka is marriage based on benefits and interests, just like a business contract, [without] affection, mercy or respect. It takes place between two parties, a man/client who is usually older and a girl who is either underage or just over 18.  The age gap between the man and the girl could reach up to 40 years,” she says.

Deal marriage begins when a man, usually non-Egyptian, pays an expensive dowry to the girl’s family in return for marrying her for a specific period of time. This can range from days to months, depending on what the man wants. If the marriage is only for the months of summer, it’s called zawag el-mesyaf, or summer marriage.

Moreover, a broker or a relative also benefits from the girl’s marriage. This person receives a commission for mediating the marriage and convincing the girl’s family of the benefits of the deal. In many cases, this commission is higher than the girl’s dowry.

“Brokers receive money for finding the right girl for the client. The right girl means; beautiful, young, plump and longhaired. The broker moves to the next stage where he/she has to convince the parents that the client is the right man for their daughter, her future and theirs too,” says Ali.

She adds, “the family of the girl do not think of that type of marriage as deal marriage, they see it as a way of insurance for the girl and her future.”

A study by Ekbal El Samaloti the dean of the High Institute for Social Work in cooperation the National Council for Childhood and Motherhood (NCCM) in 2009, examined zawag el safka.

The study was conducted in the Giza districts of Hawamediya, Badrashin and Abou El Nomros. After interviewing 2000 females from these areas, the study showed that 74.3% of these females were married to non-Egyptians males, mostly Arabs, who visited Egypt. Of these non-Egyptian males, 81 per cent were Saudi, 9.6 per cent Emirati, 3.5 per cent were Kuwaiti and 2 per cent were Jordanian.

Aya’s parents welcomed the idea of marriage to a non-Egyptian because one of their relatives was married to a Jordanian and the relative’s marriage was stable.

Aya explains, “You may say that the precedent in our family paved the road for the idea. I got married to my husband in three days, then we left for Jordan.”

When she arrived in Jordan, Aya discovered her new husband had another wife and four children. “Surprisingly she was Egyptian too and lived with his family. I soon joined the crowd.”

One year after arriving in Jordan, Aya gave birth to her first child.

She explains, “I didn’t really like living with his family. I did not like the whole atmosphere… It wasn’t my country, the people weren’t my people and the culture was different. When I knew I was pregnant I wanted to go home to see my family, but he did not approve… I felt like I was a prisoner.”

A ferry to Egypt

According to Aya the first wife hated the situation as well and tried to leave him, but was not able. “We [Aya and the first wife] cooperated and fled Jordan on a ferry. She [the first wife] left behind her four children and I left my daughter and son, on the hope that I will come back for them… and I did,” she says.

Aya stayed in Egypt for some time with her family, but decided to return to Jordan to see her two kids. When she got back to Jordan the second time, she had to take care of her children and the four children of the first wife, who remained in Egypt.

Though she did not want to, Aya was forced to bear more children. “If I wanted to stay with my children I had to obey him. Obeying him meant that he would impregnate me for the third time. All he wanted was children, he did not care for me,” she says embarrassedly.

“For a marriage to be normal, there has to be some sort of equivalence and similarity. A consensus should be reached with regards to having children, but zawag el safka bears no value for such principles,” Mansy explains.

After some time, Aya’s husband developed an “awful” drinking habit.

“He used to get drunk and hit me. His parents used to intervene sometimes, but their interventions were void most of the time. The situation became unbearable with time.”

While zawag el safka is usually over a shorter period of time, Aya’s experience lasted for nearly a decade. She realised she had enough.

“Over the course of eight years, I have suffered so much between an abusive husband, working at home besides raising seven children, four of whom were not mine, and being alone without a family in a foreign country. I couldn’t take it anymore.”

Aya’s situation is complicated. Her children are with their father in Jordan and she is stuck in Egypt. Her husband got married for the third time and does not want her to visit since the children are already with him.

Now, Aya cannot travel to get her children because her passport expired a year ago, and she failed to submit the appropriate paperwork to prove her marriage. Desperate, she approached a local NGO at Al Azizia for help. A lawyer volunteered to help get her children back.

Aya is terrified by the possibility that if the lawyer escalated the problem her husband would become hostile and would not allow her to see her children. So she is being cautious and she is trying to reach an agreement with him about her return. But so far their long distance negotiations have reached a deadlock.

Part of Aya’s problem has to do with improper documentation of her marriage, a similar problem that occurs in early marriage. In early marriage, the parents of the underage girl change her age to 18 in order to register the marriage. For zawag el safka, age is one problem if the bride is underage. If she is over 18 the other problem is registering marriage to a non-Egyptian.

Attorney Osama Fathy explains the procedures for proper documentation for marriage to a non-Egyptian. “The non-Egyptian husband, especially husbands from the Gulf countries, would need an approval from their respective embassies. After they get the approval, the marriage contract must be registered in the Notary Office,” he says.

Fathy notes, “If the marriage is unregistered in the Notary Office, this renders the wife non-existent to the husband’s country and denies her many rights such as custody.”

Custody laws differ from one country to another, and Aya could fall victim to these differences.

Ali illustrates other problems that are related to the sexual health of the girls who are involved in zawag el safka. She says, “Some of them [girls] are second or third wives. The girl becomes at risk of being infected by disease because of her husband’s multiple sexual partners…the girl’s family would then end up spending quadruple the amount they received for the marriage of their daughter.”

According to Ali, if she contracts a disease, the girl could be psychologically affected as well. She could be socially stigmatised and alienated by the community, being looked down as a source of disgrace and shame. Additionally, the girl would be put off from marriage, if not men in general, because of violence inflected upon her at home.

Additionally, the girl might never be able to marry again because of violence inflected upon her at home.

Ali says, “Unfortunately, zawag el safka turned marriage from a relationship of love and shared responsibility to a slave market.”

Mansy believes that in order to overcome of zawag el safka, state and non-state actors need to target the reasons for the trend.

She says, “From our research, poverty is not the only reason behind the phenomenon, but it’s a crucial motive. Other motives are the new norms that have grown in response to the flocks of Arabs who visit Egypt for the summer time.”

Higher dowry paid by non-Egyptians and families with many girls are all perpetuating factors.

Mansy states, “After the revolution, the numbers of Arabs who come to Egypt have diminished compared to previous years. This has led the phenomenon to decrease, but we can’t say it disappeared. Families still wait for Arab visitors and they try it out with one of the daughters. When it works, they repeat it with the others.”

Ali believes that the problem could be solved if other alternatives were found. She says, “If a family let its girls continue their education and invest them in learning some crafts to help the family generate income, instead of generating income through their marriage, this would help diminish the problem.”

Ali adds, “civil society tries to raise awareness, but without the help of the government the responsiveness of the people won’t be as strong. People’s responses vary; some of them listen while others don’t. Those who listen came to us saying we did not know.”

Now, Aya is mostly worried about her children’s future.

“My parents learnt the lesson the hard way, now my four sisters are never going to get married the way I did. I accepted my fate, but all I’m hoping for right now is to get my children back here where I can raise them among my family and enrol them in schools.

“I don’t want my two daughters to be uneducated like me. I want them to have a better future where they do not fall prey to circumstances.”