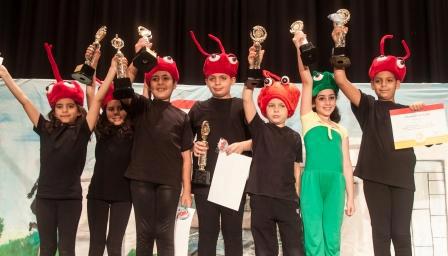 Helen O’Grady, drama teacher and actress, rented a little hall in a suburb in Perth, Australia, in 1979, and started after-school drama classes for children. Little did she know that these classes would set the foundations for Africa’s largest and most widespread drama school with 49 drama academies worldwide.

It was just a matter of time until the franchise reached Egypt. Maija Lamu and Jaylan El-Zoheiry, a sports aficionado with a teaching background and business whiz, were looking to get their children involved into an activity that would improve their communication skills and boost their confidence. They noticed that the Cairo scene was lacking when it came to these sorts of children’s activities and decided to set up a new initiative. Therefore, El-Zoheiry got in touch with the Helen O’Grady Drama Academy and in no time brought it to Egypt.

“The language of instruction in the drama studios is English; however 85 to 90 per cent of the children attending are Egyptian,” said Lamu.

The drama programme seeks to better the children’s verbal communication skills, confidence, and self-esteem and helps them acquire public speaking and performance aptitudes.

“We always tell the parents that their children need to attend the drama studios for a minimum of two years until they can see results and the optimal age to start with drama is five. […] After two years parents as well as teachers would notice an improvement in concentration skills and self-confidence,” said Lamu.

But El-Zoheiry and Lamu are not only focusing on enriching children’s intellectual capabilities, but also on improving their physical ones and since a healthy mind sits best in a healthy body, they have set up winter and summer “Creative Talent Camps (CTC).”

“The CTC winter and summer camps mix sports with drama activities, arts and crafts and various other cultural and fun activities; it’s all about having fun and keeping fit, that’s why our last summer camp was called ‘Fun Fit’,” said Lamu.

The drama academy is not only a means to acquiring social skills; who knows, maybe your child will end up a famous actor or actress and they have to start their career somewhere. In this sense, the Helen O’Grady Drama Academy in Cairo will stage Henry Lee’s “To Kill a Mockingbird” in April 2013. The play will be hosted throughout schools and universities in Cairo and has quite a diverse crew, which I’m sure will do justice to one of the most famous courtroom dramas.