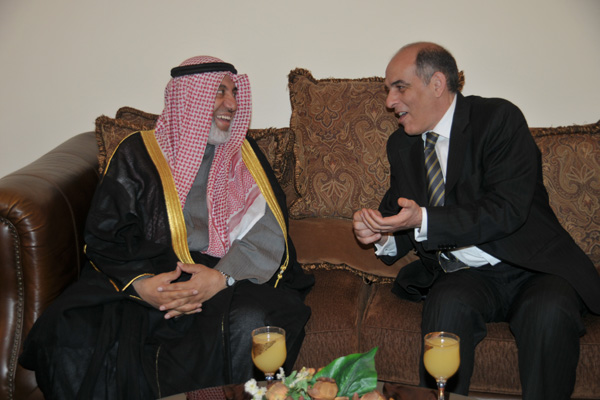 Minister of Petroleum Osama Kamal stated that the Organisation of Arab Petroleum Exporting Countries (OPAEC) is reviewing ways to improve co-operation and integration amongst its member nations. At a recent meeting, ideas were being discussed to allow Iraq and Algeria to use currently vacant Egyptian oil refineries. Details of any deal were to be worked out at a later date.

He added that discussions were also underway with representatives from Qatar and Algeria to “increase the amount of Liquefied Natural Gas (LNG) being imported into Egypt. These imports would make up for low production levels of Egypt’s own natural gas factories.” If implemented, this project would continue until 2015 or 2016.

A Jordanian delegation from the Egyptian-Jordanian Joint Committee came to discuss plans between the two countries to allow companies from the former to drill for oil in the latter.

Kamal stated that an “agreement had been reached between the two countries governing Egyptian gas exports to Jordan that would satisfy the energy needs of both countries.”

He added that the ministry did not plan to lift subsidies on petroleum products but that the government would attempt to guide consumption by identifying specific amounts of subsidised oil to be sold at the same price as diesel and gasoline.

The amount of energy that would be allotted for consumption by Egyptian consumers, Kamal said, is to be determined according to their level of use in society. Diesel fuel for example, receives nearly EGP 50 billion in subsidies each year, despite the fact that Egyptian vehicles do not consume that much. Nearly 15 per cent of all diesel fuel that does get produced in Egypt ends up getting smuggled onto the black market, both locally and abroad, and is valued at an estimated EGP 7.5 billion yearly.

Kamal added, “discussions are underway between Egypt and Bahrain in OAPEC’s Executive Council to discuss efforts of cooperation in natural gas production.” However, the two sides have yet to reach an agreement.

He added that a new economic vision had been laid out at the meeting with regards to Egypt’s mineral resources sector that may soon be presented to Egypt’s cabinet. He said that the changes proposed had the potential to radically alter the way the sector was run and were not simply a series of superficial, structural alterations.

Kamal also added that there still existed several points of contention between the Egyptian General Petroleum Corporation and the Australian company Centamin regarding the use of diesel fuel in Al-Sukri gold mine. Rulings had recently been made in Egyptian courts allowing diesel fuel to be traded openly on the free market for the purpose of research and exploration. This law has been retroactively applied to the Al-Sukri gold mine, which has led to further disagreements between the two sides.

Kamal said that food production factories and storage units would be exempted from having to pay increased rates for mazut fuel, so as to avoid raising the price of food for Egypt’s poor.

Abbas Ali Al-Naqi, the secretary general of OAPEC, said that the organisation was currently reviewing plans for joint Arab development projects in petroleum and that several companies affiliated with OAPEC are considering investment in such projects. These companies include the Arab Maritime Company for Petroleum Transport, the Arab Company for Investment APICORP, the Arab Corporation for Petroleum Services in Libya, and the Arabic Company for Ship Production.

Al-Naqi stated that joint Arab projects in heavy oil refining would continue to be the topic of discussion for OAPEC’s next meeting, scheduled for 12 February, 2013.

He said that the meeting would be open to members and non-members of OAPEC, in an attempt to maximise the flow and exchange of information with regards to oil refinement in the Arab world.

Al-Naqi added that continued oil production and exploration in Egypt was a necessity and that it was the government’s responsibility to attract more foreign investment in order to increase production levels.