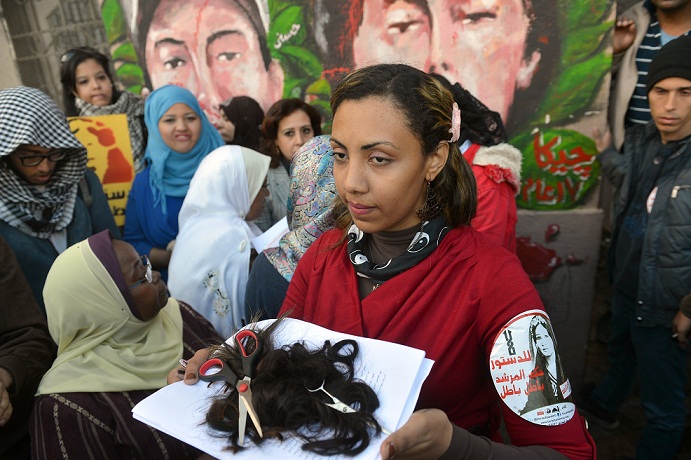 Almost a dozen girls gathered near Tahrir Square Tuesday afternoon to cut locks of their hair in protest against the new constitution.

The constitution was voted on in a referendum which took place on 15 and 22 December. The protest was held shortly before the official results of the referendum were to be announced. Preliminary results suggested 64 per cent of voters approved the draft constitution.

“Freedom costs a fortune,” Fatma Sherif, one of the organisers of the protest, said, “it’s not our hair which crowns us women; our freedom does.”

Sherif stated that women have been subjected to oppression since the early days of the revolution. She recalled incidents such as subjecting women to virginity tests, dragging them in the streets and stripping them off their clothes to prevent them from protesting.

“In the end, they produce a constitution which doesn’t protect our rights,” said Sherif.

Women, some of them wearing a headscarf, gathered in front of the graffiti of Gaber (Jika) Salah, a boy who was killed in clashes near Mohamed Mahmoud street in November. They covered their mouths with strips to symbolise being forcefully silenced. They then removed the slips only after locks of their hair were cut. “We only retrieved our freedom when our hair was cut,” said Sherif.

The hair-cutting exercise persisted for over two hours. Om Abdel Rahman, a woman wearing a full veil, cut a lock of her hair behind her veil and proudly posed for a photo with the lock. “The constitution doesn’t give women the right to run for president,” Om Abdel Rahman said. She added that God declared men and women equal in the Quran, thus it shouldn’t be up to the constitution to repress women.

Hoda Youssef, an elderly, underprivileged woman, stated that she took part in the protest since the new constitution doesn’t preserve her rights. She said she voted “No” in the referendum.

“I earn EGP 300 every month,” Youssef said, adding that the sum is insufficient. “I’m 65 years old; everybody tells me I’m too old to work. My husband died years ago, and still to this day, I can’t receive his pension.”

People gathered to witness the hair-cutting event; some of them sympathising, others disapproving. “I was passing by when I noticed,” So’ad Ahmed, a middle-aged woman said, adding that she approved of the protest. “But I don’t think cutting our hair is necessary.”

Om Abdel Rahman was repeatedly interrupted by a crowd of men who gathered in protest of the event. “If they don’t agree with the constitution, they can protest, sit-in, go on television,” Atef Abdallah, one of those disapproving the event, said. “But to cut their hair?! This could lead them to take off their clothes next time, as a form of protest.”

Women’s movements have repeatedly campaigned against the referendum. Article 33 states that all citizens are equal before the law and equal in terms of rights and duties and there is no discrimination between them. The part that says that there will be no discrimination based on sex, ethnicity, language, or religion was removed.