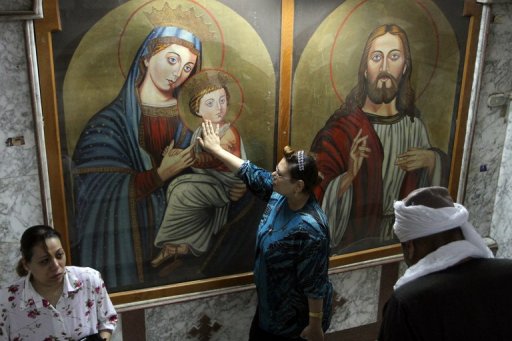 Egypt’s Coptic, Catholic, and Evangelical churches disclosed a note Tuesday night to the office of the presidency. The note listed articles in the newly-ratified constitution with which they have concerns and felt should be clarified. Representatives from the churches reportedly discussed the articles extensively with Vice President Mahmoud Mekki during recent national dialogue sessions.

The disputed articles include ones dealing with roles and procedures surrounding Al-Azhar and some addressing personal and religious rights and judicial powers.

The memo included Article 4, which states that Al-Azhar’s grand sheikh cannot be dismissed and the method of appointing him is to be “determined by law.” The churches also included Article 219, which they cited when withdrawing from the Constituent Assembly, saying they felt “discomfort with the trends that prevailed in the writing of the draft.” The article is an extension of Article 2 and specifies the valid sources of Islamic law.

The churches also included Article 10, a controversial part of the constitution addressing the “family” and the role of women. Article 10 says “the family is the basis of society, religion, morality and nationalism” and calls to “reconcile the duties of women towards her family and her work.”

The letter to President Mohamed Morsy also included Article 43, which guarantees freedom of religious practice only for “heavenly religions” (Islam, Christianity and Judaism) as regulated by law. The churches argued that the freedom featured in this article should be absolute and not subject to legislation restricting it.

Articles 51 and 52 were also included and deal with the formation civil institutions and syndicates. However the articles don’t prohibit the creation of political parties based on specific religious beliefs.

The statement additionally included Article 70 of the new constitution, which discusses the freedom of children. The article says that every child has the right to a proper name, family care, nutrition, shelter, health services and religious, emotional and cognitive development. The churches wanted stricter wording to prohibit child labour and for an explicit age limit set for marriage.

The churches also pushed to include human trafficking in Article 73, which criminalises sex trafficking.

The three churches withdrew from the Constituent Assembly before it passed the draft constitution. However, they remained neutral during the referendum, urging their congregations to vote and make decisions based on their own personal beliefs and consciences.

Proposed amendments would have to be presented to parliament once it is elected. Any changes to the constitution need approval from two thirds of both the House of Representatives and the Shura Council. They would then have to undergo a nationwide referendum before being ratified.

Coptic lawyer Naguib Gabriel confirmed that the churches had attempted to raise these issues to the presidency during national dialogue sessions, but maintained that they were not able to come to any immediate compromises before the referendum.