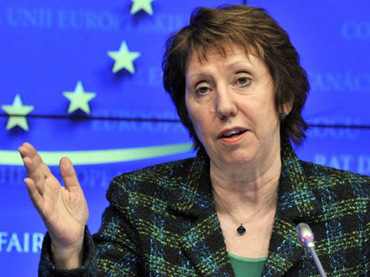 She said on Tuesday, “given the continuing need for consensus-building and inclusion, I reiterate my previous calls for dialogue among all parties in Egypt in order to make further progress toward deep and sustainable democracy.”

“We have been opening our arms for a long time now for a national dialogue, but [the opposition] never cooperates,” said Freedom and Justice Party spokesperson Muhamed Soudan. “After the approval of the constitution, they should go. Everything is done now, they have no choice.”

While the National Salvation Front (NSF) has consistently rejected President Mohamed Morsy’s calls for dialogue, they say they support the EU’s call.

“We are not against dialogue, it is just actual dialogue that we want,” said NSF spokesperson Seif El-Khawanky. “Dialogue is important, but what [President Morsy] is offering is not dialogue. A dialogue means there is potential for results, to hear and listen to each other.”

“This is not true,” responded Soudan. “Dr. Al-Beltagy [a leading member of the Muslim Brotherhood] had a press release where he said they are keeping the headquarters open for anyone to come, negotiate and discuss the future of the new Egypt.”

Ashton’s statements showed an awareness of this divide pervading in Egypt: “I take note of the majority voting in favour of the Constitution. I also note that voter turnout was at 33 per cent.”

Maja Kocijancic, a spokesperson for Ashton, responded to the prospect of continued stagnation in dialogue by saying, “we cannot speculate that this dialogue will not happen.”

The high representative concluded, saying, “Egypt is a close partner of the EU and I want to stress our support for Egypt’s democratic transition.”