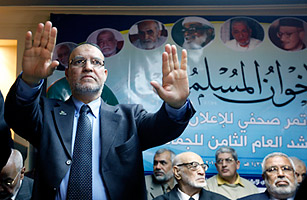 Essam El-Erian, vice president of The Freedom and Justice Party urged Egyptians living in Kuwait to be considerate to the circumstances and fears of the country they live in.

El-Erian praised all Egyptian expats who have proven their loyalty to the 2011 Revolution and to the democratic transition, in an interview with a Kuwaiti news service, state–owned news agency MENA reported.

Around 46,000 Egyptians in Kuwait have voted in the referendum with 60.3 per cent voting “Yes” to the constitution.

El-Erian said that this proves the integrity of the referendum. He believes if there were flaws in the referendum, the results in Kuwait would have been different.

El-Erian called on Egyptians living in the Gulf country to bear in mind the situation of Kuwait and the fears that some countries have from the historical transformations going on in Egypt. He added that these Egyptian expats should know these transformations will benefit the whole region. El-Erian said Egyptians should be advocates for love and peace to the Kuwaitis.

Tensions have been running high between Egypt and countries in the Gulf region since the 2011 Revolution toppled former President Hosni Mubarak. Last month, 18 Egyptians, who belonged to two political groups, were arrested and deported from Kuwait.

El-Erian also revealed that legislations will be made to encourage investment in Egypt. He urged Egyptians living abroad, who have savings and are willing to invest, to put money into real estate, agricultural, livestock and industrial sectors.