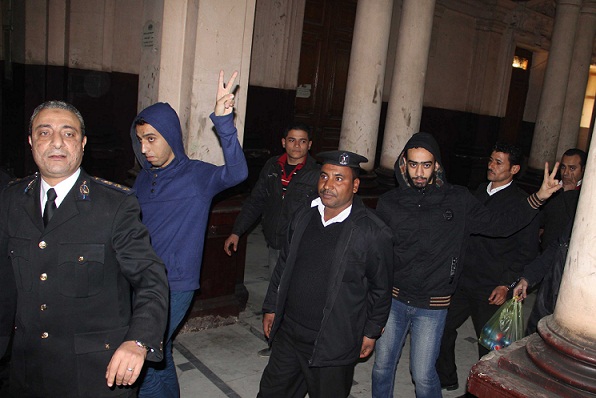 Investigation into the attack on the head of the judges’ club, Ahmed Al-Zind, resumed Wednesday, a mandated judge led the investigation for the first time.

Al-Zind was attacked outside the judges’ club Sunday, after holding a meeting on the prosecutor general’s decision to rescind his resignation.

“The mandated judge, tasked with investigating the attack of the lawyers, at the defendants’ request, led the investigation with a degree of neutrality and transparency,” said Seif Al- Islam Hammad, a human rights’ lawyer who recently joined the group of young lawyers defending the three detainees.

The investigation reportedly lasted for almost 10 hours, during which the judge questioned every single detail of the attack. The investigation was twofold; one aspect was evidence against the defendants and their response to the accusations, the other was their claims to have been attacked during their arrest, Hammad said.

“Shortly after the investigation was over, the judge recalled us back to his office after receiving new evidence from the judges’ club,” Hammad said. He stated that the new evidence was delivered to the judge by lawyers working at controversial lawyer Mortada Mansour’s office. The evidence included a small paper with scribbles of chants; a worthless piece of evidence according to Hammad. The other paper was a handwritten report on the attack by a couple of citizens claiming involvement with Hazemoon members, adding their willingness to testify. Hazemoon is a movement involving supporters of disqualified
presidential hopeful Hazem Salah Abu Ismail.

The lawyers defending the alleged assailants represent a wide spectrum of political movements, Hammad said. Islamist protesters rallied during the investigation, in a show of solidarity with the defendants, reported state-owned news agency MENA. The defendants were remanded in custody until the investigation resumes Saturday. The judge ordered to look into the forensic report prepared on the defendants’ condition.

The three jailed defendants claim not to have attacked Al-Zind at all. They admitted that they were originally five, chanting against Al-Zind outside the Judges’ Club, accusing him of pretending to be a revolutionary while he belonged to former President Hosni Mubarak’s supporters. They nevertheless denied throwing rocks and firing at the head of the judges’
club. No weapons were found upon the arrest of the defendants. Hammad stated all witnesses claim gunshots were fired by the prosecutors and judges present during the attack.