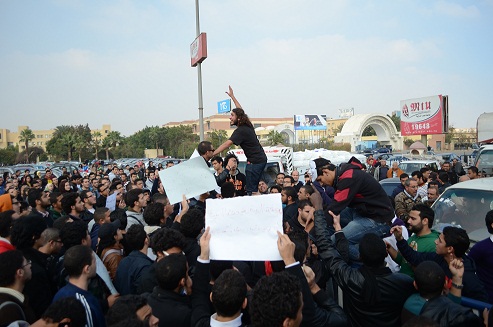 Sameh was hit by a speeding truck. MIU students and administration claim the truck driver was 14 years old; he was driving without a license. Egyptians under the age of 18 cannot obtain drivers’ licenses.

Students gathered inside the university campus Thursday, protesting in front of the university administration building, then advanced cutting-off the Cairo-Ismailia desert road to make their voices heard to the government. The road was blocked shortly; not longer than five minutes said Ghayda’ Sabry, MIU student who took part in the protest.

“Almost 500 students are taking part in the protest,” Sabry said. She added that the protesting students are demanding road security measures both from the university administration and the government.

The students demand a road bump on the road to force vehicles to slow down. “The area includes a number of schools alongside the MIU,” said Sara Fawzy, board member in the MIU student movement. “This isn’t the first road accident to take place in the vicinity of
the university. At least six previous road accidents happened within a single semester.” The authorities refuse to insert a road bump under the pretext that the Cairo-Ismailia desert road is a motorway.

Another demand is building a pedestrian bridge to allow crossing the road safely. This demand was also declined for security concerns. “The military holds trainings nearby; they claim the bridge would offer a view to their trainings,” Fawzy said.

The MIU administration also agrees with the students for the need of appropriate safety measures. “We are willing to fulfill the students’ demands,” said Hamdy Hassan, vice president of the university student affairs, “Yet, our hands are tied by the government’s
restrictions.”

The protesting students also blame the university administration for not being there for Sameh’s family after the accident took place.

“Sameh’s father remained with his dead son for an hour until the ambulance arrived,” Fawzy said, adding that no representative from the university administration accompanied the father.

Sabry claimed it was the students who were with the father. “The students seized the driver and handed him over to the police,” she said. “They were the ones who filed a report against him.”

Hassan claimed it was the university administration which called the ambulance and supervised the deceased student’s transportation from the campus. He added that the university informed the police of the accident immediately, denying that the driver was arrested on the spot.

“It was a hit-and-run accident,” Hassan said. He stated that the police managed to arrest the driver within the hour.