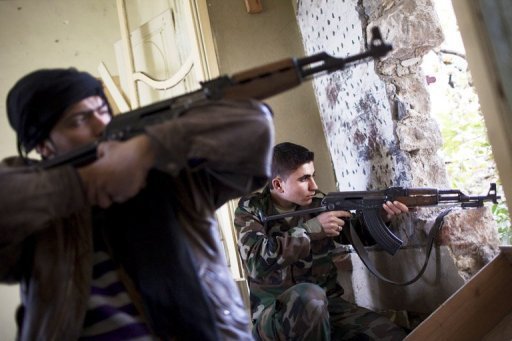 AFP – DAMASCUS — International peace envoy Lakhdar Brahimi called on Thursday for “real change” and a transitional government in Syria but the armed opposition swiftly retorted that that could not include President Bashar al-Assad or his top lieutenants.

The envoy unveiled his initiative in Damascus as Russia, the Syrian regime’s most powerful ally, denied the existence of a joint peace plan with the United States, amid a flurry of year-end diplomatic activity to try to end the bloody 21-month conflict.

“Change should not be cosmetic; the Syrian people need and require real change, and everyone understands what that means,” the UN-Arab League envoy said on the fifth and final day of his latest peace mission to Syria.

“We need to form a government with all powers… which assumes power during a period of transition. That transition period will end with elections,” Brahimi said.

He did not specify a date for the envisaged elections, either presidential or parliamentary depending on what could be agreed. He also made no mention on the fate of Assad, whose current term expires in 2014.

“The transition period should not lead to the collapse of the state and its institutions,” Brahimi said, adding the initiative was incomplete.

A diplomat at the UN Security Council said on Wednesday that the veteran Algerian troubleshooter had received no support from either side since arriving in Damascus on Sunday.

“Assad appears to have stonewalled Brahimi again, the UN Security Council is not even close to showing the envoy the kind of support he needs and the rebels will not now compromise,” the diplomat said.

The armed opposition National Coalition and Western governments that recognise it reiterated on Thursday that no transition that gave a role to Assad and his inner circle would be acceptable.

“We will accept any political solution that does not include the Assad family nor those who harmed the Syrian people,” National Coalition spokesman Walid al-Bunni told a press conference in Istanbul.

“Our first condition for them is to leave the country,” he added.

France, which was the first Western government to recognise the opposition grouping as sole legitimate representative of the Syrian people, said Assad should not have any role in a transition, accusing him of “still ferociously repressing his people.”

Russia, which to the fury of the West has refused to cut cooperation with Damascus, hosted a Syrian delegation headed by Deputy Foreign Minister Faisal Muqdad, ahead of talks on Saturday with Brahimi.

“This is of course a part of the efforts we are undertaking to encourage dialogue not just with the government but all opposition forces,” foreign ministry spokesman Alexander Lukashevich said.

Moscow denied reports of a new initiative with Washington that would see Assad stay in power until 2014 while preventing him from renewing his mandate.

“There was not and is not such a plan and it is not being discussed,” Lukashevich said, adding Russia’s policy was still based on a Geneva accord reached in June between world powers for an inter-Syrian dialogue.

The accord called for a sustained ceasefire, transitional government, a Syria-driven peace process and review of the constitution, but has fallen by the wayside as it left open the question of Assad’s fate.

Brahimi too denied such a plan has been devised, saying he had only “proposed” and “wished” there was an agreement between the Americans and Russians.

The Syrian Observatory for Human Rights says it has documented more than 45,000 deaths in violence since the uprising against Assad erupted in March last year, but adds the real death toll could be as high as 100,000.

There was more violence on Thursday, with a car bomb in a Damascus suburb killing four people and wounding 10, a day after 121 people died nationwide, the Britain-based watchdog said.

Fierce fighting between troops and rebels raged in the central cities of Hama and Homs as well in the northwest and south.