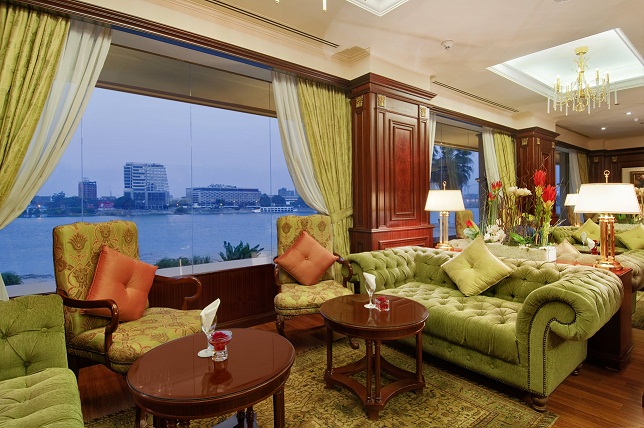 The Tea Time Lounge provides a beautiful view of the Nile from the mezzanine level of the Zamalek Hilton. Comfortable furniture is surrounded by mahogany panelling and ornate carpets, creating a feel of colonial nostalgia for a time when a British officer could get a cuppa while watching feluccas languish through pre-war Cairo.

The cocktail menu was the only culinary highlight on par with the view. It offered eight different choices, including classics such as whiskey sour and gin fizz.

The Negroni was harsh, with an awkward ice cube plopped in the centre that appeared to have come from one of the hotel’s hallway ice machines. On the other hand, the Tom Collins was first class, going down easy like lemonade on the porch of a sprawling Georgian plantation.

The two-page menu provided a concise and well-ranged spread, with vegetarian and “healthy choices” marked with different symbols. The first page included a “light menu” consisting of appetisers and smaller dishes, ranging from 30 EGP to 50 EGP.

We started with some safe-bet appetisers that neither impressed nor disappointed. The enchiladas were filled with dry chicken chunks and fat red pepper wedges. The cheese was already cooled on top and we had trouble cutting through the stiff tortillas. Our plate full of calamari and shrimp were well above average and presented alongside a knockout barbeque sauce with an ambrosial tang.

The lack of ambition of the Tea Time Lounge, however, came to a head when we received our entrées.

The chicken reminded us of a plastic toy. It was large, but what it made up in quantity, it sorely lacked in quality. It was flavourless and unadorned, paired with french fries and an ambiguous and uninspiring, maroon-coloured sauce.

The “spicy” tuna sandwich was served on a room temperature baguette and stuffed with what was most likely canned tuna.

In the end, the fare at the Lounge left much to be desired and did not keep up with the standard of the price or formal atmosphere. Temperature in particular seemed to be a problem, though it was not clear whether culpability lay within the kitchen or the front of house staff.

Service at the Tea Time Lounge was responsive, but slow, even by Egyptian standards. We ordered a large bottle of water upon arrival of the appetizers, only to have it brought to the table as we finished our main dishes. Cocktails and food also arrived after significantly long periods of time.

The staff did prove to be accommodating, not hesitating to move tables and chairs to make room for easier access to the dishes that had been laid out.

We recommend enjoying the Nile view and the great atmosphere of the Tea Time Lounge for pre-dinner drinks or passing through for coffee with friends after dining elsewhere.

But with Zamalek being home to a spectrum of fantastic restaurants that offer cheaper, more creative, and more palatable dishes, the Lounge can be skipped for meal time.